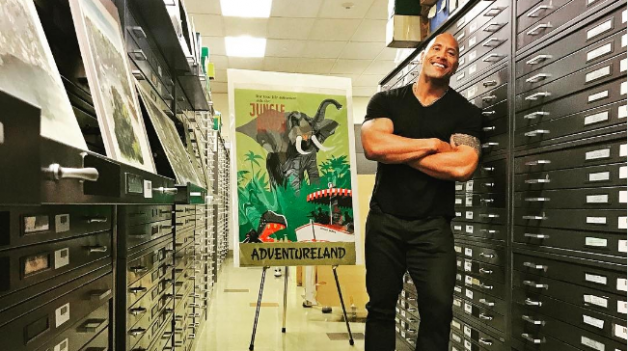 Dwayne “The Rock” Johnson is a force to be reckoned with. With The Fate of the Furious hitting the $1 billion mark at the worldwide box office, Baywatch splashing into theaters this summer and Jumanji: Welcome to the Jungle stampeding into theaters this Christmas, it seems that his big screen prominence will continue to grow. And with the upcoming Jungle Cruise, he’s already delving deep into research.

Johnson recently visited the legendary Disney Vault to immerse himself into Disney history. In the photo he shared on his Instagram page, we see him standing prominently at Disney’s R&D facilities. Right behind him is the official poster for the original Jungle Cruise attraction at Disneyland in Anaheim, California.

Mahalo from “the Vault” at DISNEY’s R&D facilities. Figured the best way to make an excellent #JungleCruise movie was to fully immerse myself in the rich history and culture of DISNEY. Big shout to the Imagineers for pulling out all the original #JungleCruise concept art from the 1950’s for me and oral/visual history lesson behind the iconic ride and it’s infamous and relentlessly entertaining “Skippers”. Fascinating to understand Walt Disney’s early idea for the #JungleCruise ride, which from the 1950’s concept art behind me, was original titled JUNGLE RIVER and meant to be enjoyed with LIVE ANIMALS at Animal Kingdom. Which as we all know, animals that live in and near an African river ain’t playin’ that game. ?? #JungleCruise will mark my fourth collaboration with the company and potential to be the best one of all of them. Shout to my buds Sean Bailey, Alan Horn and Bob Iger for being great partners. Kristin Burr you’re a rockstar. Thanks again team and see everyone down the road. This’ll be a fun one. #GreatestAdventureEver #JungleCruise

Johnny Depp Surprises ‘Pirates Of The Caribbean’ Fans On The Ride

Recently, Johnson surprised tourists at Walt Disney World’s Magic Kingdom to commandeer a boat on the Jungle Cruise attraction. Seeing him actively preparing for any film is exciting, which is why his prominence on social media is so infectious.

Given Disney’s history of bringing their theme park attractions to the big screen, let’s hope that Jungle Cruise follows in the footsteps of Pirates of the Caribbean rather than The Haunted Mansion. Also, given the fact that Captain Jack Sparrow was added to the official Pirates of the Caribbean attraction, who is willing to bet that the Jungle Cruise ride will add an animatronic of Johnson’s character if the film is a success?

Jungle Cruise is expected to begin production in Spring 2018. Johnson is currently filming Rampage with his San Andreas director Brad Peyton. You can see Johnson in The Fate of the Furious, in theaters now. He will next appear in the R-Rated comedy, Baywatch alongside Zac Efron, Alexandra Daddario, Priyanka Chopra and Yahya Abdul-Mateen II on May 25, 2017.