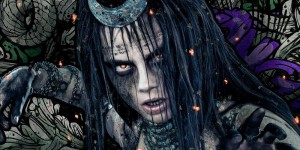 Warner Brothers’ 2nd superhero film of the year, Suicide Squad, has enjoyed a marvellous run at the domestic and international box office, raking in $732 million worldwide. While the critical response was not as enthusiastic, nothing stopped the film from knocking Iron Man and the first Transformers film out of the top 50 highest grossing films.

Professional concept artist Stephan Martiniere, who has worked on many Marvel Studios films including Guardians of The Galaxy and Avengers: Age of Ultron,  The art features the character before and after her change as evident in the film. Martiniere also drew up some designs for Task Force X member Katana as well as Enchantress’ mindless minions, The Eyes of the Adversary.

You can check out the concept art below:

Do you wish The Enchantress appeared in a more comic book accurate light like the art? What did you think of Suicide Squad? The film is still currently in theatres, but expect a DVD and Blu-Ray release in early 2017.