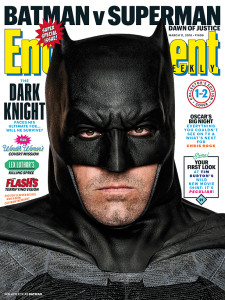 On top of Entertainment Weekly‘s brand-spanking new Batman v Superman: Dawn of Justice covers and details on the upcoming D.C. Comics extravaganza, EW writer Anthony Breznican, who was lucky enough to see the movie about a month ago, shared his spoiler-free thoughts about it on Twitter. Said Tweets are linked below:

The challenges facing this movie are enormous, the kind of challenges that makes $1 billion in box office receipts a requirement, not a success. It supposedly has cost $400 million before promotion and marketing – a mind-boggling sum. And, if you follow the movie blogosphere, it’s been hard not to hear about the high anxiety running behind the scenes at the studio about the movie and the implications for the future D.C. Extended Universe.

Add to that the huge success story of the Marvel Cinematic Universe, the muted response, critically and commercially to Man of Steel, even the recent blockbuster success of the comparatively-small budgeted Deadpool and somehow the first cinematic pairing of the Man of Steel and the Dark Knight seems almost passe.

Personally, I liked Man of Steel while recognizing it’s almost impossible to actually love. Its problems are structural and from the script so there’s very little middle-ground of interpretation when it comes to loving or hating that film. I think they made the best of a bad situation here by, as Breznican says, incorporating the criticism in-universe while continuing on the path they’ve chosen which is “grim/dark.” Reasonably, miming Marvel’s whimsy wasn’t a way forward; D.C. movies have to have their own distinct identity. Will their identity net as big an audience as Marvel’s?