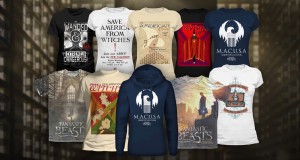 If you are hoping to walk into the screening room for Warner Bros.’ Fantastic Beasts and Where to Find Them in appropriate style then your wish has just come true. Official merchandise for the film has been revealed by Merchoid.com and fans will have plenty of clothing options to choose from before the film is released.

The line-up consists of five t-shirts and a hoodie for women while men will have the option between four t-shirts. Each article of clothing features exclusive art that offers audiences a hint of what they can expect from the Harry Potter spin-off, including the MACUSA (Magical Congress of the United States of America) logo and cover pages for fictional magazines from the Wizarding World.

Merchoid Community Manager Jessica Adam expressed her excitement over the line-up in a press statement:

“If you’re excited to see the next step in the Harry Potter cinematic universe and want to know more about fantastic shirts and where to buy them, look no further.”

Merchoids Official collection of Fantastic Beasts and Where to Find Them clothing can be pre-ordered from their official website and shipping begins October 20, 2016.

Fantastic Beasts and Where to Find Them opens in 1926 as Newt Scamander has just completed a global excursion to find and document an extraordinary array of magical creatures. Arriving in New York for a brief stopover, he might have come and gone without incident…were it not for a No-Maj (American for Muggle) named Jacob, a misplaced magical case, and the escape of some of Newt’s fantastic beasts, which could spell trouble for both the wizarding and No-Maj worlds.

Fantastic Beasts and Where to Find Them opens in theaters in 3D and IMAX on November 18, 2016.