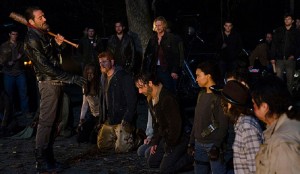 In the comics, Negan’s introduction on The Walking Dead was one hell of an introduction. The iconic villain of the series surrounding the zombie apocalypse introduced a completely badass villain while shockingly killing one of the show titular heroes. As the season finale of the TV show introduced Negan with an explosive cliffhanger, it was equally unique and has fans still trying to figure out who is on the receiving end of his baseball bat and will probably be trying to figure out up until the season premiere this October. The crew has since then gone back to Georgia and filmed the explosive first episode and actor Jeffrey Dean Morgan was able to fill in a little bit about that episode.

“That first episode back was crazy. It was just crazy. What you’re asking of these actors to put it on the line like they do, and then this scene in particular, especially if they had the summer to dwell on it, it’s a lot. Then I go blowing in like a hurricane, just dance around on my tiptoes swinging Lucille around — it was 10 days of hell, I believe, for everyone involved.”

The cast of The Walking Dead is a particularly tight bunch. Because the actors have to spend many months on end in Georgia filming the show, many of the cast become close friends through the filmmaking process. Here comes Morgan whose casting means the firing of one of the members of that close-knit family. Not only did Morgan come in and have to give a grand performance as Negan killing one of their friends with “Lucille,” the barbed-wire baseball bat, but they had to spend 10 days filming days focusing on him killing whoever the mystery person is. Emotions probably ran very high that episode.