We finally have our first look at the mysterious lead role Ezra Miller will have in Fantastic Beasts and Where to Find Them. Miller will be playing Credence Barebone. Credence is the adopted middle child of Mary Lou Barebone (Samantha Morton). The character description provided gives us some insight into the character.

He appears withdrawn, extremely shy and far more vulnerable than his two sisters. Credence is defenseless against the abuse that comes in response to the slightest infraction of Mary Lou’s strict rules. But his loneliness also makes him susceptible to the manipulation of Percival Graves (Colin Farrell), who has taken a personal interest in Credence.

Colin Farrell’s character, Percival Graves, Graves is a powerful auror (like Harry’s dad) and the Director of Magical Security in the American wizarding government. Is Credence a good guy lead down the wrong path? 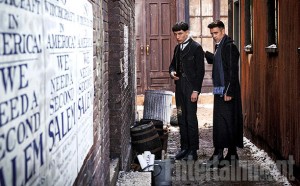 The above first-look image shows Credence and Graves together in an alley covered with posters calling for another Salem Witch Trials. The movement is lead by Credence’s mother, the head of the New Salem Philanthropic Society who wants to expose and kill wizards and witches.  The dynamic between the Magic and No-Maj (American for Muggle) will be explored heavily in the film

When pressed for more information, not surprisingly, Miller could not give much detail.

Everything’s like CIA-level. If I tell you sh– about my character, I swear there’s a sniper up on the roof that will take me out. They told me like two little bits of information about the character [when I auditioned] and I just went in and went crazy, and just talked as if I were this person, who I knew nothing about. But it was funny – there actually ended up being a lot of things like what I was imagining. But getting the role was a moment of absolute ecstatic joy and sort of transcendent sense of completion. I was doing some sort of slightly epileptic dane in the street of New York City, dropping to my knees, crying, praising the heavens, with people looking at me like I should be institutionalized.

Fantastic Beasts will be released nationwide on November 18, 2016.