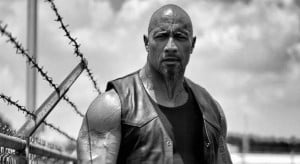 The Rock took to Instagram today to post the first look at his character Hobbs in Fast 8.

He also posted the following with the picture:

When you strip a man of all he has. All that’s important to him. You force him to return to his roots.. and sometimes that’s a very dangerous and twisted place.

If I was going to return for another Fast & Furious I wanted to come in and disrupt the franchise in a cool way that got fans fired up and their blood pumping to see a new version of Hobbs and his “Daddy’s gotta go to work” mentality and set the table in a cool way for where the character goes in the future.

Maybe it’s a spinoff movie. Maybe it’s more ‪#‎FF‬ movies. Or hell maybe Hobbs just gets on his motorcycle and rides off into the sunset never to be seen again.

Either way, I’ve had a solid first week of shooting, good to be back with the ohana, good to work again w/ my bud and director F. Gary Gray and our home studio of Universal Studios Entertainment, as always have been the best partners to me and my Seven Bucks Productions team. Most importantly… you guys around the world will really dig this new version of the role, ’cause as we always say, disrupters dent the universe.

With Johnson’s mention of possible spin-off films for Hobbs it looks like the Fast and Furious franchise has a lot of future potential.