This season on Supergirl, Kara (Melissa Benoist) will be facing off against a new threat in Season 3 Big Bad, Reign (Odette Annable). Today, we have gotten our first glimpse of her, and well… she doesn’t look all that scary… yet.

In the Season 2 Finale, we saw Reign being sent away from Kryton to Earth as an infant, but when we first meet Samantha Arias this season, she’s all grown up, a single mother who knows nothing about her true origins as a “Worldkiller.” Check out the image of Samantha Arias and her daughter (played by Emma Tremblay) below. 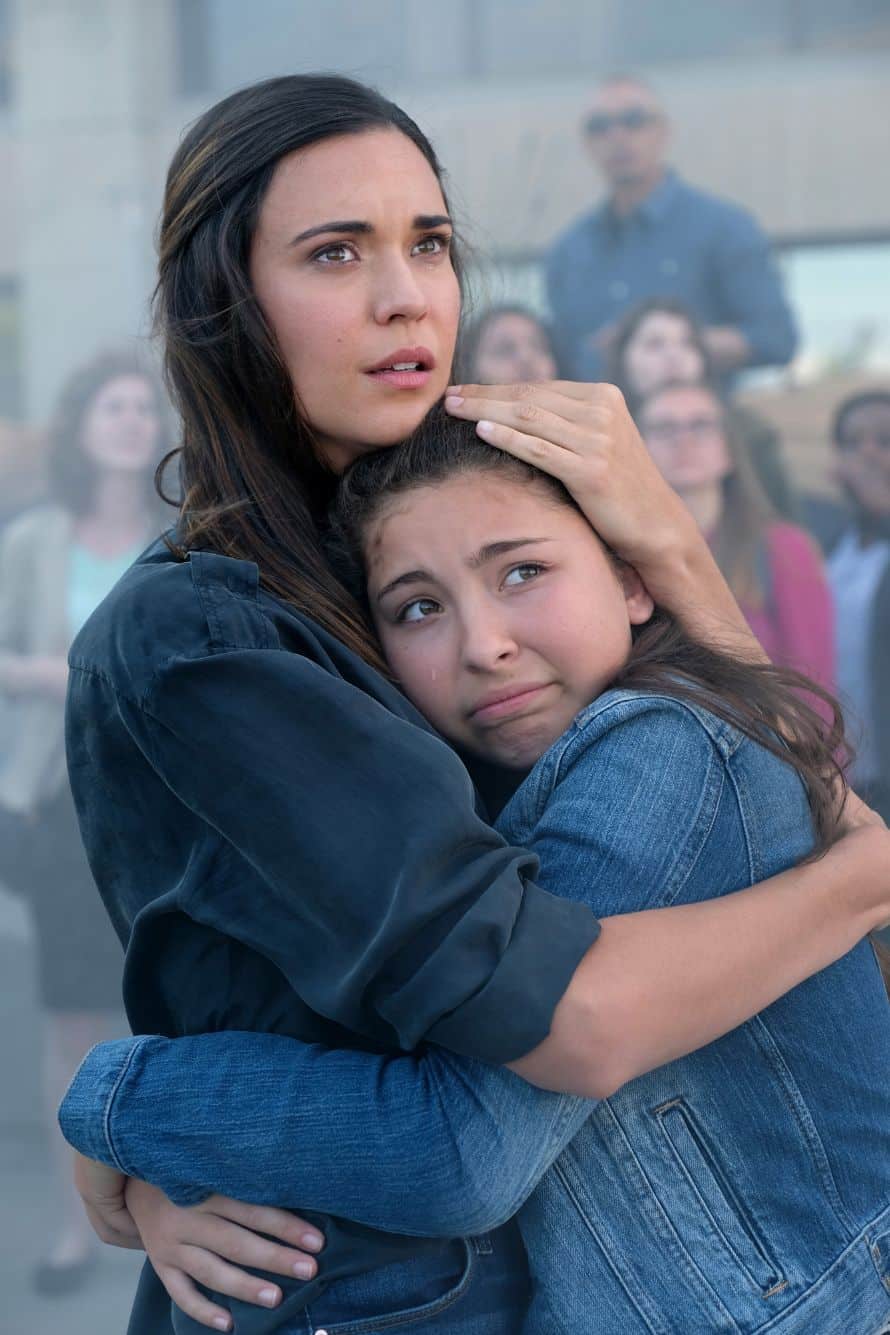 “But she has no idea! She has been living in National City as [a now grown-up] person named Samantha Arias.”

He went on to say:

“One thing we’ve never done on Arrow or The Flash is watch the villain become the villain. Sam is just Sam. [But as the season progresses, she] will realize there is something different about her. It’s a fun dark-mirror version of the journey Christopher Reeve took in the original Superman as Clark.”

Kreisberg also revealed that her becoming Reign will drive a wedge into the cast of Supergirl, stating:

“Everyone will have a relationship with her, and that will drive much of the season in terms of how far they’re willing to go to stop her when she becomes Reign. Some will believe she needs to be saved; others will think she needs to be stopped.”

Here is the official synopsis for Supergirl Season 3:

“SUPERGIRL is an action-adventure drama based on the DC character Kara Zor-El, (Melissa Benoist) Superman’s (Kal-El) cousin who, after 12 years of keeping her powers a secret on Earth, decides to finally embrace her superhuman abilities and be the hero she was always meant to be. Twelve-year-old Kara escaped the doomed planet Krypton with her parents’ help at the same time as the infant Kal-El. Protected and raised on Earth by her foster family, the Danvers, Kara grew up in the shadow of her foster sister, Alex (Chyler Leigh), and learned to conceal the phenomenal powers she shares with her famous cousin in order to keep her identity a secret. Years later, Kara was living in National City and still concealing her powers, when a plane crash threatened Alex’s life and Kara took to the sky to save her. Now, Kara balances her work as a reporter for CatCo Worldwide Media with her work for the Department of Extra-Normal Operations (DEO), a super-secret government organization whose mission is to keep National City – and the Earth – safe from sinister threats. At the DEO, Kara works for J’onn J’onzz (David Harewood), the Martian Manhunter, and alongside her sister, Alex, and best friend, Winn Schott (Jeremy Jordan). Also in Kara’s life are media mogul Cat Grant (Calista Flockhart), James Olsen (Mehcad Brooks), a photo journalist who moonlights as Guardian, a masked vigilante, Lena Luthor (Katie McGrath), and Mon-El of Daxam (Chris Wood), whose planet was ravaged by Krypton’s destruction. As Kara struggles to navigate her relationships and her burgeoning life as a reporter, her heart soars as she takes to the skies as Supergirl to fight crime. Based on characters created by Jerry Siegel and Joe Shuster, SUPERGIRL is from Berlanti Productions in association with Warner Bros. Television, with executive producers Greg Berlanti (“The Flash,” “Arrow”), Andrew Kreisberg (“The Flash,” “Arrow”), Sarah Schechter (“Arrow,” “The Flash”), Robert Rovner (“Private Practice,” “Dallas”) and Jessica Queller (“Gilmore Girls,” “Gossip Girl,” “Felicity”).

Supergirl returns for its third season Monday, October 9th at 8pm ET on The CW.