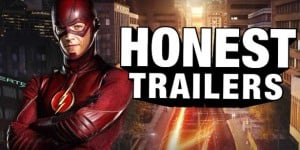 Screenjunkies has released another in their line of Honest Trailers, this time tackling the beloved Flash TV show. While the overall tone of the trailer is positive, they do point out several nitpicks.

The idea that The Flash is a soap opera targeted at the male audience is one, while other character and acting quirks round out the trailer. Watch the trailer below and see what you guys think:

Perhaps the biggest surprise pointed out by the trailer is how a lot of Barry’s running is exactly the same scene in every episode– something to look out for in this upcoming season.

Barry (Grant Gustin) is living his dream life – his parents are alive, he’s asked Iris West (Candice Patton) on a date and he can finally be a normal guy as Central City has another speedster, Kid Flash (Keiynan Lonsdale), running around saving the city. When Barry starts forgetting parts of his old life, the Reverse Flash (guest star Matt Letscher) taunts his nemesis and tells him that there will be serious repercussions for Barry and the ones he loves if he continues to live in this alternate universe. In addition to losing his memories, his powers will also start to fade. When disaster strikes, Barry must decide if he wants to continue to live in this world as Barry Allen or return to his universe as The Flash.

The Flash speeds onto television screens for its third season tonight at 8pm EST on The CW.