We are just a few hours away from the third season premiere of The Flash where we will finally see the ramifications of Barry Allen’s decision to go back in time and stop the death of his mother at the hands of The Reverse-Flash. Comic Book fans are especially eager to see how this story will unfold as it brings to life one the most popular and consequential story lines in DC Comics history: Flashpoint.

Written by Geoff Johns, Flashpoint also told the story of Barry Allen traveling back in time to alter history by saving his mother. However, while the small screen adaption will also feature changes to Barry’s timeline, the exact nature of these changes on the series will be different from the comic book source material.

The Flashpoint comic book story altered the entire DC Universe, creating new versions and histories of heroes, including The Flash’s fellow Justice League members. While The Flash TV series has introduced several characters from the comics, it is not operating with same history as its comic book counterpart, limiting the extent to which the show can directly adapt the original story. In an interview with EW, executive producer Andrew Kreisberg discussed the differences between the comic book and television version of Flashpoint:

Obviously, the comic books dealt with this giant war between the Atlanteans and the Amazonians, and Thomas Wayne being Batman. All of that stuff is not at our disposal, which is fine with us because we really wanted to do something personal to Barry having changed his friend’s lives and Barry coping with [the fact that] he may have traded his happiness for his friends.“

While The Flash may not be able to directly adapt the comic book version of Flashpoint, Kreisberg assures fans that there will be some Easter eggs and references to the comics:

“There’s a couple of nods to the comics in there. There’s actually some dialogue from the comic in the episode. But as always the movies are the movies and TV is TV, we’re not trying to infringe on their purview. The episode is a much more personal one. The stakes in the comic book in Flashpoint were global and the stakes in this episode are very much just about Barry, his existence and the people that he loves.” 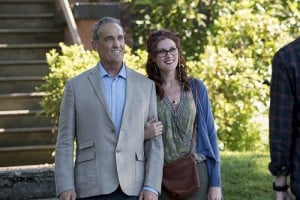 Trailers for the third season hinted at drastic changes to the shows timeline and characters, prompting fans to ask if these alterations would be permanent and if not, how long would they last? Kreisberg explains that while the changes to the timeline may not last long, the ramifications of Barry’s decision cannot be entirely undone: