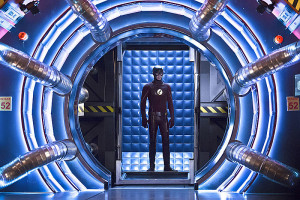 The Flash is under fire by the public after another speedster in maroon leather starts committing crimes. Considering how fast the Flash moves, it’s no wonder people are confused. This tightly plotted episode plays in the same lighthearted nature as an early Season 1 episode, and it’s a welcome change after so much of Zoom’s darkness. The episode was directed by Glen Winter and written by Lauren Certo and Lilah Vandenburgh.

Team Flash shows up at a waterfall, located between two huge cliffs, to try out a new speed trick: the Flash wants to gain enough traction that he soars into the air. Nope, doesn’t work. Of all the amazing things the Flash can do, including creating a giant wormhole-closing electricity cyclone, he can’t gain enough traction to jump between two cliffs. Luckily, he is saved by four drones, each carrying the corner of a big net. Yes, you read that right. Barry is saved by drones. Carrying a net.

Barry and the team return back to the lab, and Barry is more determined than ever to get this new trick working, to get any trick working, in order to stop the increasingly deadly threat of Zoom. Cisco’s suggestion? Get turnt! And Barry, Jesse, Cailtin, Wally, Iris, and Cisco (all the young people) promptly set out to get turnt at a dark CW-esque club. Before they leave, Harry slaps a tracking device on Jesse’s wrist, which is pretty terrifying when you think about it. He doesn’t want to lose her again, understandable, but… yikes. I wouldn’t want Harrison Wells on any Earth to be my dad.

Jesse’s probably thinking the same thing when she sneaks off to the club’s restroom to pry off that wristband. And… it doesn’t work.

Barry and Iris then ponder how strange it was that their Earth-2 counterparts are married, and Barry suggests they are probably currently engaged in a good old fashioned “Netflix and chill” session. That means having sex, in case you don’t know, so it’s a good thing they’re interrupted by Trajectory. The mysterious speedster, characterized by her maroon and (look out Flash) cornrows, wreaks generally villainous havoc around the club.

The similar style seems to confirm to everyone else, however, that the Flash is the perpetrator, which is pretty surprising considering all the different speedsters, all of whom resembled the Flash in one way or another, who have shown up this season. Iris is ordered to write an article titled “Streak To Freak” (gross). A big moral dilemma for our journalist on the inside.

Somehow, Jesse’s tracking device reveals a sound recording of Harry revealing some condemning truths about the length to which he went to save her from Zoom’s grasp. Yeah, he killed Turtle. He killed the coolest villain to ever grace this show, and she doesn’t know if she can ever trust him again. Okay, so that’s not exactly why she’s upset, but she’s still shocked to find out her father is a killer, even if it was to save her.

Barry discovers the Velocity-9 (V9) drug that Jay Garrick had used, and gets mad that they never suggested it before. As anyone with common sense would assume, the V9 is dangerous and was making Jay sick, and that’s why it’s off the table. Pretty ironic, when you consider how good V8 is for your daily vitamin intake. That’s when Cisco unexpectedly “vibes”, and finds Trajectory’s whereabouts. The Flash is off to the races, but doesn’t get the girl.

Caitlin Snow is able to deduce that the speedster got her powers from a similar drug to V9. Caitlin and Joe West tracks down the friend who helped her develop V9, and it’s very clear that her quirky comrade is the culprit. The only thing missing is the cornrows. Joe isn’t convinced, but they head back to the lab anyway.

Iris reluctantly invites her boss, Scott, out to coffee. Yes, he’s the “Freak To Streak” guy. Thankfully he neither freaks nor streaks during the coffee date, and instead tells a dull anecdote about why he has trust issues with public figures (though, in his defense, I’d say Barry’s secret identity alone makes him decidedly non-public.) Scott leaves abruptly when he finds out this is not a date.

Back in the definitely-Trajectory Eliza’s lab, she responds to the angry voices in her head by injecting herself with more V9. It’s a true Norman Osborn/Green Goblin moment when she looks in the mirror and sees Trajectory staring back at her. It’s a very cool scene, but it almost trivializes the novelty of the Flash’s powers. It makes me wonder: are there too many Flashes in the kitchen? I mean, in the coffee shop? I mean, in the STAR lab?

Speaking of which, Trajectory breaks into STAR Labs and imprisons the Flash, declaring it’s “time to have some fun”! Yippee! Let’s get this party started, cornrow Flash! She demands more V9 from Harry and “Caity” at gunpoint, and introduces herself for the first time as Trajectory. “Why do the crazy ones always name themselves?” wonders Cisco, and rightly so (and why do they name themselves so poorly? “Trajectory” is so hard to say). Harry offers to make more V9. On a side note, Trajectory is very similar to ‘Arrow”s Cupid, another crazy villain with copycat powers; you can read about her my ‘Arrow’ recap tomorrow night.

Jesse passes out, foaming at the mouth, and wakes up in a hospital bed. There’s some subtle humor in the weird classification of her blood type, of which Harry is a match. Cisco’s on point this episode, yelling, “That’s not a thing on our Earth, dude!” Jesse, bedridden, expresses once more her disappointment in her father, who just cares way too much about her survival. She can’t believe how easily he submits to the will of evil, which is a good point. I would say this is a hint toward his potential toward darkness, like his Earth-1 counterpart, but Earth-1 Harrison Wells was actually Eobard Thawne (yet they have the same personality… I’m still scratching my head about that one).

Trajectory escapes the lab and threatens to structure of a highly populated bridge, and the Flash does all that he can to save them before getting socked by Trajectory, whose fun is getting ruined. And that’s when Barry faces the exact challenge he set for himself at the beginning of the episode: he must run at Mach-3 to jump from one end of the bridge to another to stop the villain once and for all. And this time, of course, he succeeds.

Only Trajectory won’t listen to him. She injects herself with more V9, and runs so fast that she turns blue, and, eventually, so fast that she evaporates entirely, save her mask. And the blue? It’s the same color as Zoom’s, which, Barry later suggests, is caused by V9, and that it means Zoom is sick and needs a cure. Who else was sick and needed a cure? Jay Garrick. And whose helmet causes Cisco to vibe images of Zoom? Jay Garrick’s. Yeah, the team is now officially on to him. As any normal person would, Barry runs out to the waterfall from the beginning of the episode, and he screams into the sky.

Iris visits Scott and suggests that maybe a date wouldn’t be such a bad idea. *yawn*

Harry finds Jesse’s abandoned wristband, which has a recording that explains that she’s off to explore this Earth on her own, and she wants to be left alone.

Eliza is one of the most fun villains the Flash has faced throughout both seasons, even if her powers are somewhat derivative. Even better, the humor is getting more refined with every episode. I’m also glad this episode was a stronger advancement of the plot, which every episode seemed to be building toward at this point last season. Here’s hoping the momentum keeps up for the final act of the season.