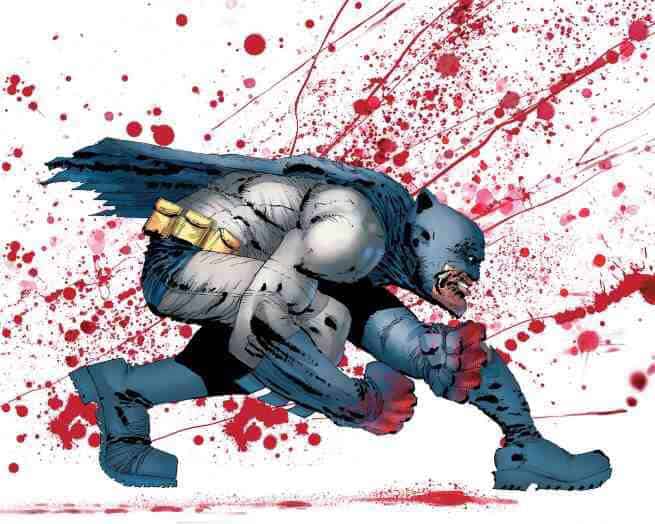 With the March 25, 2016 release date for Batman v Superman: Dawn of Justice looming on the horizon, DC Comics is stoking the flames of fandom with the first peek at the full color art for Dark Knight III: The Master Race. Due to Frank Miller’s ongoing health issues he is unable to complete the Dark Knight III alone and has handed over the art duties to Andy Kubert and Klaus Janson, but Miller’s distinctive art style will be seen in the Atom minicomic, scheduled to be released with the first issue. Each issue will come with a minicomic that expands the world of the Dark Knight III by focusing on other characters.

First, DC released the image of Superman, and today they released the variant cover for issue #1 of Batman drawn by Frank Miller. Both images stand in stark contrast to the prevailing house styles of Marvel and DC. Miller’s brutal momentum borrows from classic Kirby as much as avant garde painters like Philip Guston. It is the rarest thing to see in mainstream comic art, a challenge. Miller is a master storyteller and illustrator that reimagined and created comic book tropes for a whole new generation, and here he is turning everything on its ear.

But some fans are complaining about Miller’s depiction of Superman, deriding the art on social media and taking Miller to task for art they consider to be sloppy. Fans raised on the prevailing ready for storyboards style of modern comics are having their expectations challenged.  I’m not saying anyone has to like it, but they need to respect it. Every detail is a choice, based on the lifetime experience of one of the medium’s greatest voices. The power of experience and wisdom is knowing how to convey exactly what you set out to say.

“I’m saying it’s not the result of someone “losing it.” It’s the result of Frank wanting to say something different, that you don’t like. It’s not failure. It’s successfully saying something that you didn’t want him to say. But he wanted to, so he did.”

I love the way Frank Miller’s art has developed over the years into an emotionally expressive and challenging take on the conventions of superhero and illustrator styles. Honestly, Frank is more relevant and plugged into the actual street styles bubbling up at SPX than any of his old vanguard peers. What do you think about Frank Miller’s art and legacy? Given his health concerns in the last few years, we might not have as many chances to enjoy and discuss new work by this titan of the industry.