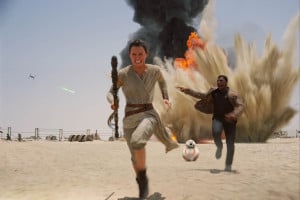 The Hollywood Reporter has learned that filmmakers Jason Friedberg & Aaron Seltzer, the infamous directing team behind critically lambasted films including Disaster Movie and Vampires Suck, have their sights set on the Star Wars franchise for their next parody film.

THR reports that the project will be produced by Covert Media CEO Paul Hanson and Todd Garner of Broken Road Productions. Cover Media will finance the film and launch the worldwide sales in Berlin.

Paul Hanson praised Friedberg & Seltzer’s work in a statement made to The Hollywood Reporter:

“Jason and Aaron are a powerhouse duo who have proven time and time again that they are fully tapped into what audiences love,” said Hanson. “Their fearless take on pop culture has us beyond thrilled to tackle the world’s most popular franchise with the two of them leading us into a galaxy far, far away.”

While Star Wars and the science-fiction genre have been parodied numerous times in the past, most notably in Mel Brooks’ 1987 comedy Spaceballs, Friedberg & Seltzer are far from the comedic legend status that Brooks has earned for his career. The notorious directors have helmed several poorly received films, such as Epic Movie and Best Night Ever, with many of them regarded as some of the worst movies ever produced.

How do you feel about the multiple Razzie Award nominated filmmaking duo developing a Star Wars parody? Is this a disaster waiting to happen or are the notorious directors due for a win? Share your thoughts below!

Star Worlds is targeting a production start date of Fall 2017.