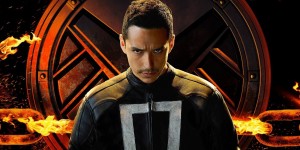 Last night’s season premiere of Marvel’s Agents of SHIELD introduced Ghost Rider to the Marvel Cinematic Universe, a much-anticipated debut considering the character’s previous appearances in two lambasted feature films. While some viewers may have anticipated a slowly built up reveal to the character over the course of the season, the show was quick to not only give us a glimpse of him but also featured a fiery duel between Ghost Rider and Chloe Bennet’s Daisy Johnson, aka Quake, in the episode’s final moments.

Actor Gabriel Luna posted a behind the scenes video of the fight on Instagram on location in the scrap yard. The footage captures the moment when Quake launches Ghost Rider’s alter ego, Robbie Reyes, across the scrap yard and into a van with the help of some wire work.

In light of the Sokovia Accords, and with Hydra obliterated, S.H.I.E.L.D. has been legitimized again and no longer needs to operate in the shadows. Since the world presumes that Coulson is dead, the organization needed a new Director to be the face of the organization. Coulson finds himself back in the role as an agent and teamed with Mack, and together they are tasked with tracking down and confirming the presence of Enhanced people, aka Inhumans. They have been trying to track down and capture Daisy, aka Quake, who has gone rogue in an attempt to atone for sins from the past. But with the world believing that Daisy is a dangerous outlaw who has taken down banks and bridges, the new Director has no qualms about taking her down for good. Agent May is tasked with training specialist strike teams, and Fitz and Simmons have taken a big step forward in their relationship. But with Simmons’ new promotion as Special Advisor to the Director in Science and Technology, Fitz, as well as her former team members, finds it hard to confide in or trust her since she’s now the Director’s confidant.