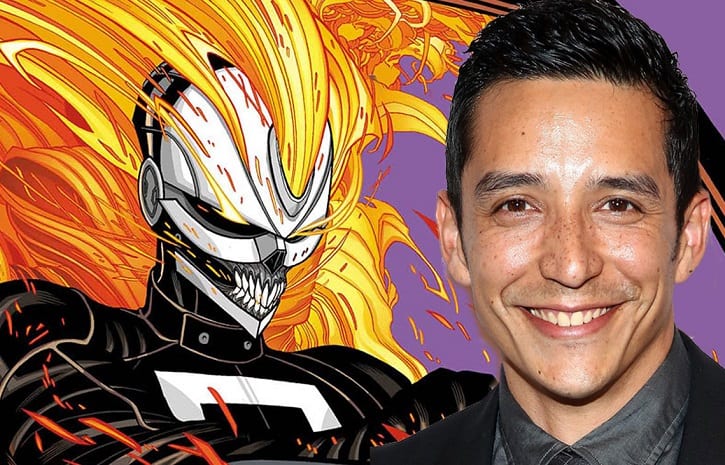 We’re just a little over a month away from Marvel’s Agents Of S.H.I.E.L.D. returning with their season premiere and with that comes the introduction of Ghost Rider into the Marvel Cinematic Universe. The series will feature the Robbie Reyes version of that character will , played by Gabriel Luna, who briefly had a comic book series that ran twelve issues from 2014 to 2015. With the character’s series only having a short run, the series will be expanding upon the character’s canon Luna told The Hollywood Reporter in a recent interview.

“Because there is so little material on him right now, a lot of the show is going to be expanding the Ghost Rider canon. That’s really cool. It’s all me. It’s all on me.”

Luna is glad that the showrunners chose to go with Robbie Reyes over the past incarnation due to the character’s family history and backstory which the actor began to feel a “kinship” with while researching the role. Luna had the following to say in regard to the character and his story.

“It’s so early right now, and there’s very little I know right now. We have the first episode in the can. What I’m really excited about is that the Robbie I had in my mind, he’s there. It’s not just his name or his body. His personality is all there. And it’s still the Ghost Rider. The Ghost Rider is a completely separate thing from Robbie. It’s something that always inhabits his body and something that he always has to fight. It’s an evil thing. That’s what they have maintained in the writing. It’s going to be a really solid interpretation of Ghost Rider. But as for his family, we’re going to have to wait and see if they show up.”

As far as what Luna is looking forward to most about the role, it’s the internal conflict between Robbie Reyes and the spirit which inhabits his body.

“A lot of what happens in the books is that Robbie has this internal conflict with the spirit of vengeance. It’s a really strong story. I’m excited to get to show how he’s able to exist with this spirit of vengeance and not only harness it but own it. That’s always been central to the Ghost Rider story. Sometimes the Rider totally takes over and that’s a terrifying process. It’s always this push and pull between the two characters.”

While we will have to wait to get our first official look at the chracter, Luna did reveal that the flaming head will definitely be him. He then added that “they are using “a combination of CG and also some marking on my face so I can do some expressions.” I’m definitely excited about this upcoming season of Agents Of S.H.I.E.L.D. and each new announcement just increases that. With a new 10p timeslot and the introduction of Ghost Rider, I’m curious just how dark the series will go. Only a few weeks left until we find out. Let us know what you think about Luna’s comments in the section below.