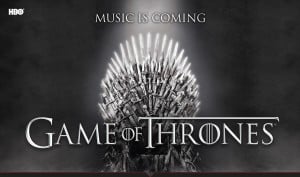 Rally the Realm, Game of Thrones fans! Music is Coming! Following a live event today in Los Angeles, HBO’s Game of Thrones is announcing an epic, nationwide concert tour.  The special announcement event was posted for fans that could not attend on Periscope today. Fans were treated to an exclusive visual experience and a Q&A with the show’s composer, Ramin Djawadi and Bran Stark, Isaac Hempstead Wright.

The 28-city event will be produced by Live Nation and headlined by Djawadi himself. The concert event promises to be nothing short of spectacular and is billed as “an immersive music and visual experience that will bring the Seven Kingdoms to life on a scale never seen before. Using state-of-the-art technology, Game of Thrones composer Ramin Djawadi, along with a full orchestra and choir, will take fans on a musical journey through the realm – from King’s Landing to Winterfell, along the northern stretches of the Kingsroad to The Wall and across the Narrow Sea to Braavos, Meereen and beyond.”

Existing footage from the popular TV series and exclusive images created for the tour will be used to bring the world of Game of Thrones to life.

Executive producers David Benioff and D.B Weiss were excited to make the announcement:

For seven years, Ramin has been blowing our mind with his music’s force, subtlety, and endless inventiveness. The GoT Concert Experience will be unique in the history of concert tours, an eye-popping, ear-splitting, phantasmagoric blend of the show’s visuals and Ramin’s powerful compositions. We are more excited for it than anyone.

The concert will kick off Feb. 15, 2017 in Kansas City and will include stops in Madison Square Garden,  Los Angeles Forum, and the MGM Grand in Las Vegas. Tickets go on sale at livenation.com starting Aug. 10. at 10 AM.