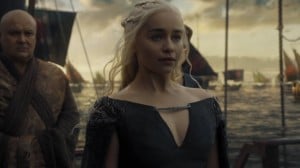 Major Spoilers ahead! Read at your own risk!

News is starting to trickle in about season 7 of Game of Thrones.  The actors are returning to Belfast and filming is set to begin soon. IrishThrones  reports activity in Corbet, which was the site for Riverrun. Since filming has not yet started, it is likely the crew is preparing the sets.

Now for the big news. I warned you…this post is dark and full of spoilers.

Sources have revealed to Watchers On The Wall that the Mother of Dragons will be making an appearance at the Dragonpit. In the A Song of Ice and Fire books, the Dragonpit is a location in King’s Landing located on a hill where the Targaryens housed their dragons.  It was destroyed years before the events of A Song of Ice and Fire, and now only ruins remain. It is possible that this is where Dany will begin her siege of King’s Landing, considering the hill will be a great vantage point.

After several filming locations were revealed in Spain, it is likely that Game of Thrones will be using the Italica, the Roman ruins located in Santiponce, Seville as the site for the Dragonpit. This has yet to be confirmed so we will watch this closely as filming draws closer.

This new site reveal is a major step forward in Daenerys’ story line. Since the Dragonpit is located in King’s Landing it looks like Dany will in fact be in King’s Landing during season 7.  This will be largely satisfying for fans of the series as we have been (impatiently) playing the waiting game on Dany’s arrival to Westeros.

Source: Watchers On The Wall