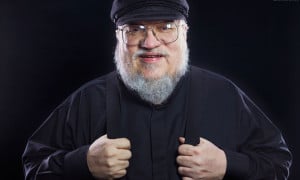 George R.R. Martin is a famously lethargic writer and it has allowed his still-ongoing A Song of Ice and Fire novel series to be overcome by its HBO adaptation, Game of Thrones, now in its sixth season. Martin, meanwhile, is toiling away at the sixth book The Winds of Winter and recently told IGN that, despite the show adapting his story before he can write it, it won’t spoil everything – mainly because characters are dead on the show that remain alive in the books.

“It involves a couple of characters, one of whom is dead on the show but not dead in the books,” Martin said. “The show can’t do this stuff, because they killed a character that I have not killed.  I get all this stuff about being bloody-minded, but [showrunners David Benioff and D.B. Weiss] are bloodier than I am.”

Martin has warned about the butterfly effect as far back as the show’s first season, warning about the singer Marillion’s (Emun Elliott) tongue-removal in the finale and also about the Dothraki Qotho and Rakharo’s deaths. Comicbookmovie.com has a pretty comprehensive list but I’ll spare you the mind-numbing amount of characters that fit into Martin’s butterfly effect category to give you my expert opinion – Stannis Baratheon.

Outside of Sansa’s story, the biggest change to Season 5 was the death of Stannis and everything he held dear. Stannis is a book fan-favorite who was adapted less than favorably so his end was less mournful than if his book counterpart had died. Nonetheless his fate in the show does not bode well for the latter’s role in The Winds of Winter. He’s the biggest power player the show had preemptively removed yet and thus the biggest candidate for the twist Martin is talking about.

Alternatively, I would guess the twist would involve Mance Rayder, dead on the, alive in the books as an undercover spy at Winterfell. Last heard, he was held captive after helping Theon escape with a hostage everyone believes to be Arya Stark (yeah, the books are even more convoluted than the show). Or perhaps the answer involves Stannis and Mance.

Another expert opinion: we won’t know till we get The Winds of Winter.