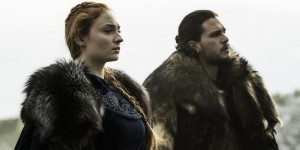 Filming for Season 7 of Game of Thrones is well under way in Belfast, Northern Ireland. The cast returned for another week of filming complete with Instagram moments with each other and with admiring fans.

The queen of Instagram at the moment is the Khaleesi herself, Emilia Clarke. The Mother of Dragons was reunited with her squad, Grey Worm (Jacob Anderson) and Missandei (Nathalie Emmanuel). They look fierce as ever! Looks like we can expect

The other half of a Song of Ice and Fire, Jon Snow (Kit Harington), is also back with his former cast mate and current girlfriend, Rose Leslie. The two were spotted doing some shopping together at the Belfast Candle Company.

Kristofer Hivju posted an adorable selfie with  Bella Ramsey who plays the Lady of Bear Island, Lyanna Mormont.  Hivju does not give anything away about the upcoming season or whether or not he has filmed scenes with the fan favorite but says:

Can’t tell you if our characters meet or not this season – but I can tell you this: you have SO much to look forward to in season 7!

In other filming news, the Game of Thrones crew has been active in Saintfield, Northern Ireland. Our friends at Watchers On The Wall reported last week that Game of Thrones was returning to Saintfield to film several scense. This is the same location of the Battle of the Bastards, however, it is being reported that there is not a battle scene being filmed there currently. It is likely a scene at the godswood tree – which could mean any of the three present Starks in the North – Sansa, Jon, or Bran – could be filming.

Game of  Thrones returns next summer. Follow along here for all the latest!

Source: Watchers On The Wall