Proving once and for all that a superstar like Will Smith can make a terrible script watchable, Gemini Man feels like a summer blockbuster from the ’90s with a glorious HD sheen. Directed by Ang Lee, the film is a beautifully shot action movie with a clunky plot that includes everything from splashy motorcycle sequences to a catacomb knife-battle. Will Smith’s Henry Brogan, a marine-turned-government assassin, discovers that his country is setting him up, sending him down a mad journey for survival that leads to him fighting a younger, fitter version of himself.

The driving force of Gemini Man is clearly Will Smith and he does a great job carrying the weight of this massive movie on his back. Not only is he charismatic during the character’s smaller moments, but he’s truly believable as the best soldier in the world and someone who’s trying to get over his past demons. In so many of his recent roles, from Suicide Squad to Bright, it’s hard to get past the fact that it’s Will Smith on screen, but here he truly disappears into the role. Despite the odd deaging effects, which I’ll get into in more detail below, Will Smith does a great job distinguishing between the two Henrys with different body language and vocal expressions when the duplicates finally interact.

Deaging technology is becoming rather popular in movies, with it recently making Robert De Niro look multiple ages in The Irishman, but it’s distracting instead of elevating here. There are a few moments where the CGI on the young Will Smith looks believable — usually from a distance — but it’s just… fine. Yes, it looks like Will Smith has been deaged and it’s certainly better technology than if it were made 20 or 10 years ago, but if someone actually saw the younger Smith walking around somewhere, they’d likely be pretty freaked out at his saturated, smooth face.

Will Smith’s Gemini Man has a relatively small supporting cast. The film’s other primary protagonist is Danny Zakarweski, portrayed by Mary Elizabeth Winstead. Her character feels somewhat basic, all of a sudden dragged into Brogan’s harrowing journey rather than establish anything for herself, but Winstead does a fine job bringing her complicated journey to life. She also performs well in the big action numbers, a great sign for fans who are waiting for her to bring Huntress to the big screen in Birds of Prey. Clive Owen also checks in as Clay Verris, a villainous, private military contractor who has a personal history with Brogan, but his performance is pretty flat and forgettable. The best of the bunch is likely Benedict Wong as Baron, an old friend of Brogan’s who just wants to help out and enjoys singing Ray Charles songs when piloting everyone through the sky. 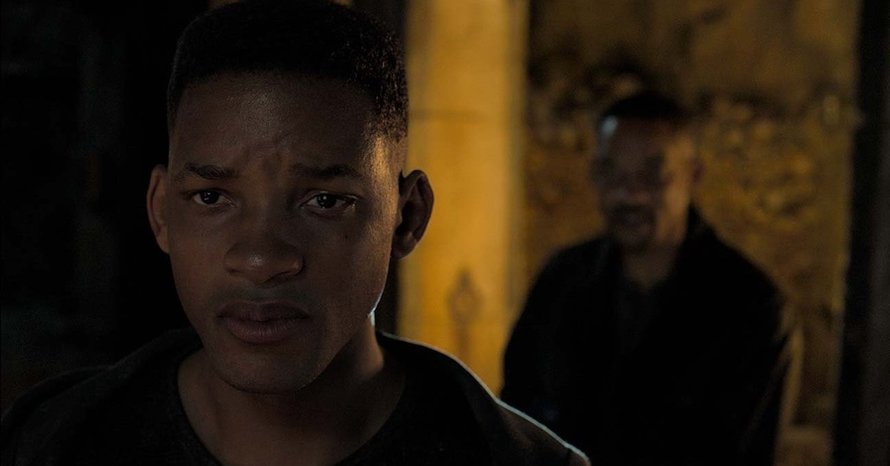 Ultimately, Gemini Man‘s basic plot is its underlying problem. With story and one of three screenplay credits going to Game of Thrones showrunner David Benioff, it’s not shocking that the film also has a clunky script filled with painfully forced dialogue. In fact, at parts the film just feels like a Jason Bourne duplicate, where the entire government is after Will Smith’s Brogan and everyone continuously utters his name while they hunt him down. Interesting themes and concepts are touched on, like eradicating PTSD by replacing the military with genetically modified soldiers and intragovernmental disputes, but ultimately everything feels paper thin. Instead of using any of the 117-minute run time on exploring those concepts to a deeper degree, it just utters out the name of war torn countries like Yemen and essentially posters the Gemini organization as a fictional Blackwater to make it feel more grounded in a real-world. There’s a lot of interesting lore hidden underneath the scenes in Gemini Man, but each moment just feels like an excuse to get to the next explosive action scene.

Despite the lackluster plot, Gemini Man excels in the action department. Lee and his fight choreography team designed some beautiful action sequences that allow audiences to see Will Smith’s Brogan react to different scenarios under pressure. Every move is perfectly calculated, and rather than fill the movie with cuts, Gemini Man doesn’t shy away from showing the characters physically hit each other or capturing real contact between vehicles. There’s an explosive motorcycle chase sequence in the second act that’s a sight to behold, with a lot of random extras jumping in and out of the way, and it gives fans another tangible lesson in why Brogan is a one-of-a-kind soldier.

With Ang Lee calling the shots, Gemini Man is obviously a technical feat. There’s been a whole lot of hoopla over the last few years about the fact that the film is shooting in 120 frames per second, rather than the standard 24, and all of that noise seems justified. The film was one of the most crisp things I’ve ever seen and everything from the establishment shots to intense close-ups are incredibly clear and well-defined. 3D sometimes gives me a headache, but nothing here felt too intense or distracting. However, I do wonder how the hyper-defined images will appear on people’s standard televisions in a few months. Dion Beebe, the director of photography on Memoirs of a Geisha and Collateral, helmed the camera here, and he does a fantastic job framing everything in an engaging way and following the action to make sure nothing is ever lost in the process.

There’s no denying that Will Smith’s Gemini Man has its entertaining moments, but ultimately it feels somewhat underwhelming. I’m thrilled that Ang Lee is still pushing the boundaries with filmmaking technology, it’s just odd that he chose to do all those groundbreaking things with this film. The main takeaway here is that Will Smith can still support a big action movie, so now it’s just up to Hollywood to make sure he gets a good script ASAP.