UPDATE: George R.R. Martin’s U.S. publisher, Random House, issued a statement to EW about the Amazon France date: “As his publisher, we support George RR Martin as he works hard to finish The Winds of Winter. Any on-sale dates currently listed online for the novel are incorrect. Once we have a publication date for The Winds of Winter, the world will know.”

Amazon France has set the internet ablaze with a release date for the highly anticipated 6th installment of the A Song of Ice and Fire series: Winds Of Winter.  The listing went up and gave a dated release of March 2017. Fans were quick to jump on this and a picture of the listing is below.  As of this publication, the listing is still live. 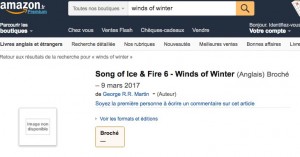 George R.R. Martin last gave an official stance (via his blog) on the release of the novel in January of this year; stating regretfully that it would not be ready for the 6th season of Game of Thrones and that he is working diligently to complete.

Martin’s UK publisher, HarperCollins, already stated to another outlet that reported the rumored release that “nothing has been finalized regarding the publication or date.”  This has also happened prior with other A Song of Ice and Fire novels, so it is best to proceed with caution. Martin will announce via his blog, so keep your eyes peeled for that – once that occurs  (and it will) – it is safe to say we have a release date.

The release date given by Amazon France does make sense given how long it has been since the last update and it is in line with when Game of Thrones would normally return to air. However, as most of you well know by now, production has started later than usual and episodes are not expected to premiere until the summer of 2017. It would be a welcome distraction to have the book in March to give fans their Game of Thrones fix while they await the return of the wildly popular television series. (On a related note – can you believe we are going into the penultimate season? I am still in denial).

Sound off below on your thoughts about this rumor and what you are looking forward to most when Game of Thrones returns next summer!