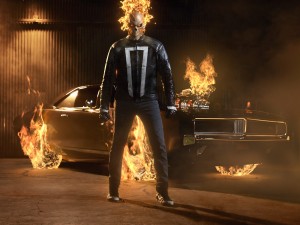 As Agents of S.H.I.E.L.D. starts season four this week, we move away from Inhumans and Hydra and go towards uncharted territory within the Marvel Cinematic Universe, the supernatural. Before we see the mysticism of Doctor Strange on the big screen, we will get to see Ghost Rider on the small screen. This version of Ghost Rider will be Roberto Reyes, played by actor Gabriel Luna. Whether he is a good guy or a bad guy remains to be seen.

ABC just released a new promo titled “Watch Out” showing Reyes suiting up and he gets ready to go for a ride in the Hell Charger, his 1969 Dodge Charger.

In light of the Sokovia Accords, and with Hydra obliterated, S.H.I.E.L.D. has been legitimatized again and no longer needs to operate in the shadows. Since the world presumes that Coulson is dead, the organization needed a new Director to be the face of the organization. Coulson finds himself back in the role as an agent and teamed with Mack, and together they are tasked with tracking down and confirming the presence of Enhanced people, aka Inhumans. Agent May is tasked with training specialist strike teams, and Fitz and Simmons have taken a big step forward in their relationship.