Destroying and protecting cities for over 50 years, Godzilla is one of the biggest film icons in the world. In Godzilla: King of the Monsters, the Kaiju beast is bigger and stronger than ever but writer/director Michael Dougherty successfully depicts him as an empathetic, caring protector ready to fight anything to save the Earth. Carrying on from Gareth Edwards’ 2014 film, Dougherty, who is a self-professed Godzilla nerd, tells an interesting story that stands on its own while simultaneously setting up big things to come from this monster-filled setting.

Part of what makes Dougherty’s take on the Kaiju world so compelling is the renewed focus on the scientific community. The military and former soldiers turned terrorists definitely have a role to play, but it really is the scientists that dominate the story. Monarch, a mysterious organization who studies the Titans to determine which ones are threats and which are safe, takes center stage here as they navigate different government agencies to pursue their research. Godzilla, like many of the original films, does a good job of distinguishing among the different scientists associated with Monarch, as many view the Titans as a force for good while others see them simply as destructive beings, instead of lumping them all into one category.

Just like the previous Godzilla film in this newest iteration, the designs of the monsters and special effects is one of the strongest aspects here. Godzilla himself is breathtaking and the film constantly showcases the King of Monsters kicking butt and pensively staring down his prey. More than that, there are moments of genuine emotion that radiate from the beasts body language in an attempt to show that he is more than just a destroyer. The monsters are all giant, but Godzilla does a good job of maintaining the scale of each creature. Mothra may be a huge monster but put her next to King Ghidorah, and the magnitude of the threat immediately becomes more noticeable and imposing on Godzilla and the human characters. 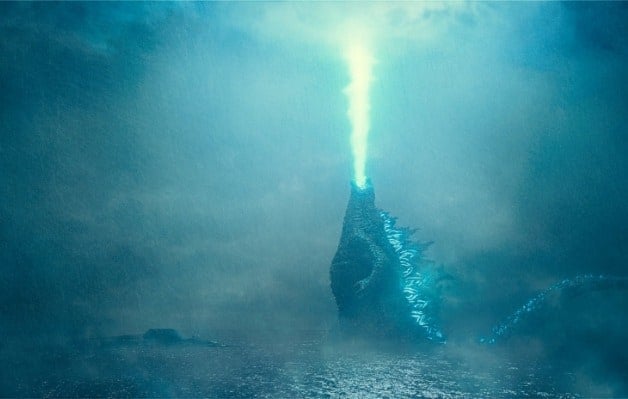 The Titans aren’t the only threats to the world in Godzilla. Similar to Thanos’ views that the world needs rebalancing to thrive again, Dr. Emma Russell (Vera Farmiga) believes the Titans can help reset the world’s natural order so she goes about trying to reawaken the ancient creatures with the help of a few eco-terrorists. Humans have ruined the world enough, a motif that first birthed Godzilla back in the 50s after the United States dropped the first ever atomic bomb on Japan, and so it’s up to Godzilla and the Titans to restore balance. While that concept could be interesting, since it was just explored so heavily in Infinity War and Endgame, and to a lesser extent in Game of Thrones, it comes across as an unnecessary plot component that isn’t explored as well as it is in the Avengers.

Godzilla may have a lot of heavy themes, but at its core, it’s a movie filled with epic Kaiju battles. The film is truly a destructive tour de force with some beautiful fights, but I wish that the cinematography team had kept things at a wide, static angle more often instead of consistently relying on closer shots of the monsters. Since the beasts are so massive, I would have loved to see them fight more from afar in order to get the true scope of things, but Dougherty often chose to get up-close in personal whenever two Kaijus are battling in a way that makes some of the sequences seem a bit incoherent.

The King of Monsters and his rival Ghidorah get top billing, but Godzilla: King of the Monsters has a solid cast trying to survive this Titan-filled world. All the actors are good, with my standout being Charles Dance- Tywin Lannister himself- as a no-nonsense ecoterrorist who wants to watch the world burn. Despite how talented the cast is though, it doesn’t excuse how stupid some of the characters act. Madison Russell (Millie Bobby Brown) puts herself in danger for what seems like no reason and simply goes along with her mother’s plan to help the bad guys until she realizes just how catastrophic it actually is. In a movie that showcases giant monsters destroying Boston, it’s honestly how stereotypical and paper thin some of the characters seemed that took me out of the movie the most.

The score, and the reinsertion of the classic Godzilla theme, really elevates the whole movie. Not only does composer Bear McCreary do a great job weaving an interesting soundscape together, but his pieces also add another layer to the film that makes the giant monster battles feel much more epic. In the wrong hands, the movie could have come across as an over-blown Saturday morning cartoon, but McCreary treats the material with respect and digs into the emotional undertones of the world.

It’s funny that my biggest complaints revolve around the human characters in a monster movie, but the film spends a lot of time developing uninteresting characters and Godzilla feels bloated as a result. There’s a huge B-plot pertaining to the splintering of the Russell family, but none of it feels compelling, it comes across as material added to a movie to give it an emotional core. If this movie was just a 90-minute slugfest between Godzilla and King Ghidorah with some Monarch scientists scrambling to contain them, it would have been far more interesting.