Skip to content
by Andrew McBride on October 3, 2016
Previous1 of 6Next 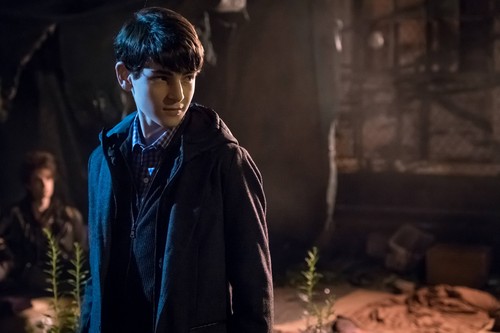 The latest episode of FOX's Gotham was another fun one, with more of the relentlessly paced plot the show has become synonymous with. You can read Heroic Hollywood's review here. As I said, there was a lot going on, but the main attraction on tonight's "Mad City: Look Into My Eyes" was definitely the live-action debut of a popular Batman villain.

And with a new episode of Gotham comes new Easter eggs for us to find and talk about! There are some cool things being teased right now on the show, so click next to browse through the list.

The spotlight-stealing villain making his debut is, of course, the Mad Hatter. If you had seen any promos for the show this week you knew he was making his entrance into Bruce and Jim's town. This is the first time we have been introduced to Jervis Tetch in a live-action setup, and he didn't disappoint. The infamous Batman villain has long been known for his distinct psychosis and manipulation strategies so his introduction sure looked promising.

What has always made the Mad Hatter so dangerous, besides his intense mental issues, is his knack for developing mind control. In the comics and animated series he usually did so through a sort of tech that he would develop, utilizing brain waves and the like. It seems Gotham is taking a slightly different approach here, with this version taking over people's minds by way of hypnosis, using both his pocket watch and a set of code phrases. Exactly how he is able to do this will be interesting to find out. And why is the Mad Hatter in Gotham, anyway? To find Alice, of course. True to the Alice In Wonderland trope central to the villain, his introduction to the city has him searching for his Alice. Only instead of women who look like Alice from the Alice In Wonderland story, which is who he has targeted in the source material before, this Alice is his sister. And she was a Hugo Strange experiment.

Last week on the Easter egg list for the show I mentioned how it seemed Penguin was looking to exert political control of some sort over the city, with a suggestion he might look to run for mayor. Well, it's one week later, and he is indeed doing just that. A great calling card to Batman Returns and other great Penguin stories, I'm very much looking forward to how Gotham handles this side plot.

You had to wait almost the very end for this one, but man was it big. Mario Falcone, the son of famed Gotham crime boss Carmine Falcone, was not only introduced but is also Lee's fiance! Appearing briefly in the Falcone-heavy storyline of Batman: The Long Halloween and then later in Batman: Dark Victory, Mario was always less involved in the criminal side of the family business. Based on this introduction, Gotham seems to be sticking to that idea.

That's all for this week guys, make sure and let us know what you think about these teases in the comment section below!