‘Gotham’: Cameron Monaghan’s Final Joker Look May Be Inspired By This Comic

by Francisco Solano Olarte on February 17, 2019

Cameron Monaghan’s final Joker look in Gotham may be inspired in The Clown Prince of Crime’s Earth-2 version from the comics.

Yesterday we shared some pictures from Gotham‘s season finale where Jeremiah, the new character that the series introduced and has always suspiciously looked as a proto-version of the Joker, indeed becomes The Clown Prince of Crime. Although his look is extremely bizarre, almost Solomon-Grundy-like; he seems to have almost no hair and his factions are exaggerated compared to what Cameron Monaghan actually looks like.

Since Gotham follows no specific story arc from the comics but instead takes bits and pieces off of some of the best Batman stories out there, there’s no actual clue to tell us which Joker this might be. But, according to how this Joker looks like, our guess is that Gotham’s version is none other than the one from Earth-2 which first appeared in Justice League Of America Annual Vol. 3 # 1 back in 2008: 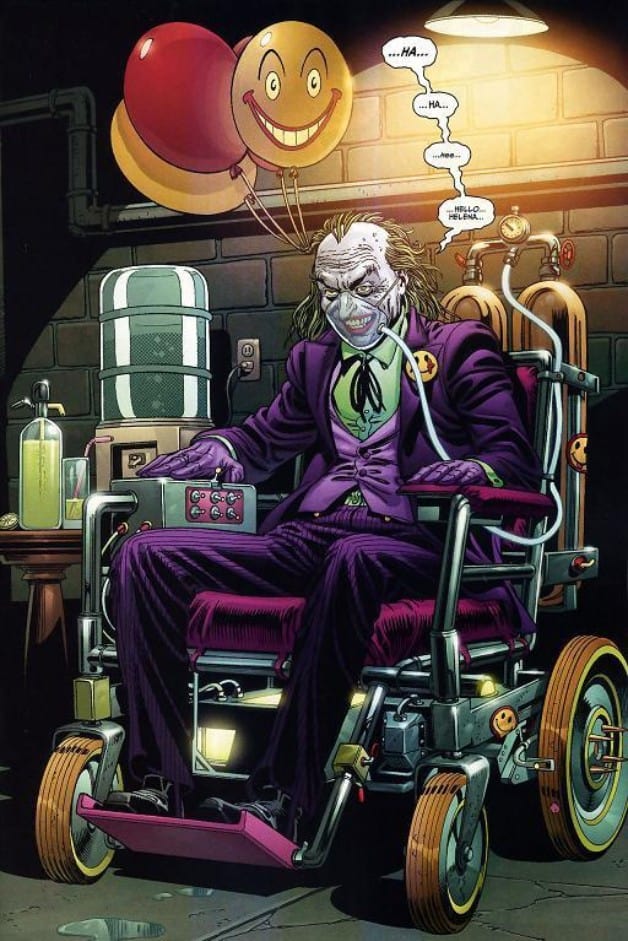 In the comics, Earth-2 Joker is already an old version of himself. After he fought Batman for years, he allegedly killed the Caped Crusader. But even with his age and disabilities, he’s still fighting against Batman supporters like Robin or Huntress, which is Batman’s daughter Helena Wayne in this universe. Although it’s very likely that we’ll see an early version of the Joker in Gotham, who’s just starting his feud with Batman, their looks are very similar.

Which Joker do you think we’ll be seeing from Cameron Monaghan in Gotham? Sound off in the comment section down below!
New ‘Gotham’ Trailer Reveals Jeremiah As Batman Villain The Joker

You can read the official synopsis for next week’s episode below!

JEREMIAH RETURNS FOR HIS MOST TWISTED PLOT YET ON AN ALL-NEW “GOTHAM” THURSDAY, FEBRUARY 21, ON FOX

Gordon races to uncover the criminal element threatening to end talks of Gotham’s reunification with the mainland. A very much alive Jeremiah (guest star Cameron Monaghan) returns and organizes a twisted recreation of the murder of Bruce’s parents with the help of Jervis Tetch aka Mad Hatter (guest star Benedict Samuel) in the all-new “Ace Chemicals” episode of GOTHAM airing Thursday, Feb. 21 (8:00-9:00PM ET/PT) on FOX.