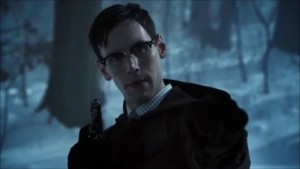 One of the highlights from season two of Gotham was Cory Michael Smith’s take on Edward Nygma AKA “The Riddler” as he had a slow burn transformation from Gotham PD’s forensic scientist to insane criminal mastermind that we know and love from the comics. While he’s not completely there compared to his comic book counterpart, it’s been a very interesting arc. Although he’s been caught and sent to Arkham Asylum, he’s still very much a danger. It also seems that he’s not done with his dastardly deeds. Season three promises much more of Nygma as he continues to break bad towards the dark side.

“He’s such a brilliant mind, and when he decided to frame Jim he came up with this brilliant elaborate plan. Which was by no means flawless — but it was pretty darn good! He kind of went full-on Riddler, but he has no idea what that means.”

“As we move [forward], and he gets out of Arkham, and has this clean slate and decides what to do, he’s embraced the darker side of himself and realized, in Arkham, he can make friends. He actually has the ability to make friends and kind of run the show a little bit. And also, he’s aware of what his skill set is. Once he starts putting this together, and deciding ‘this is my identity,’ then he can eventually don the title of the Riddler. He doesn’t know that the question mark is his emblem yet, but he’s already used it.”

Below is a video of the interview with him, David Mazouz (Bruce Wayne), and Sean Pertwee (Alfred Pennyworth) discussing next season of Gotham courtesy of Comic Book Resources.