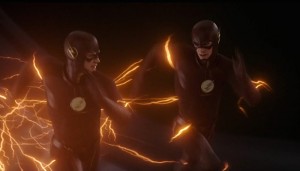 Grant Gustin, who portrays the Flash in CW’s hit series, believes as many of us do: Flashpoint is likely coming in season 3 of The Flash.

At the end of last night’s episode, Barry goes back in time and prevents his mother’s death. After being left broken by Zoom killing his father, Henry Allen, it looks like Barry needed a parent in his life. Barry is likely aware repercussions from saving his mother would be inevitable, which is partly why he decided not to save his mother’s life last season, yet he certainly is unaware of the extent of these repercussions.

Many fans are aware of the DC Comics arc Flashpoint, which was caused by the Flash saving his mother’s life. The entire universe changed as a result of this: Bruce Wayne dying and his father becoming Batman, Barry never becoming the Flash, among others. While it is unclear whether season 3 will start in a different timeline or have Barry return to the future to see the result of the changes, season 3 is almost certainly tackling Flashpoint. While Gustin isn’t sure, he says we can “make some assumptions” regarding the plot of next season.

You can read his tweets below:

Depending on how much they follow the comics, the other CW series will and should be dragged into the mess as well. Many fans are speculating Batman’s arc in the comic will be taken over by Green Arrow, and the major Flashpoint events could occur on the four-part CW superhero crossover event between Arrow, Flash, Legends of Tomorrow, and Supergirl. In an interview with Stephen Amell, Amell commented that he isn’t sure whether or not The Flash season 2 finale will affect Arrow or not.

“I don’t know, I do know that we’ve done a lot of work on Arrow to introduce the other shows, for lack of a better term, and now that that’s all done, we’re focused on doing the things that we do well for Season 5. Arrow is at its best when we’re dealing with problems in Star City. We’re not a time-travel show, we’re not a multi-Earth show, though obviously [we do that] with crossovers and stuff like that. We’re Arrow, we deal with Star City, and I feel like we’ll be better off focusing on that.”

In the meantime this all still remains mostly speculation, but it definitely seems The Flash will at least be taking some inspiration from the comic event.