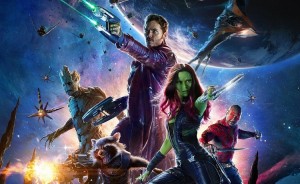 The Guardian has taken it upon themselves to calculate which Hollywood films have had the most deaths on screen, and surprisingly Guardians of the Galaxy wins by a long shot. With nearly 78,000 more deaths than its closer competitor, Guardians sees 83,871 on screen deaths.

The notion of on-screen deaths is important as other films may imply mass death, like the explosion of Alderaan in Star Wars, but don’t show them–as Gunn notes in his Facebook post about the article.

The reason for this high count is rather simple – at the end of the film, an enormous swarm of Nova Corp pilots create a Nova net – linking their starblaster ships together to try and block Ronan’s Dark Aster from reaching their planet, and destroying it. Although they’re able to heroically hold him off for a time, the Dark Aster eventually breaks through, destroying all of their ships – all told, I guess we see 80,000 ships being blown up on screen.

This is a massive visual effects sequence that took hundreds of visual effects artists thousands of hours to put together. I can’t tell you how many dozens of times I made them redo the sequence for it to look just right – but I know we were still getting revisions hours before I boarded a plan to begin the press tour in Singapore.

I hope our heroic CGI Nova Corps members know they didn’t die in vain. Not only did they help stop their planet from being destroyed, they garnered a rather sketchy world record in the process.

PS For all of you writing about Alderan, etc, etc – it’s individual, ONSCREEN EXPIRATIONS, not implied deaths through seeing planets or cities exploding. You also see a lot of planets explode in the Collector’s museum. Stop trying to take this huge honor from me.

The article also notes the number of onscreen deaths in movies has risen since 1940 from one film having about 50 deaths, to present day where Guardians killed 83,871 individuals.

The top 10 include another Marvel film, The Avengers, ranking in at number 10 with 1,019 onscreen deaths.