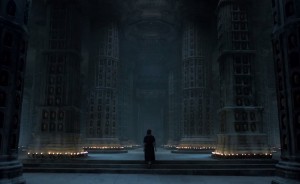 When seasons are as short as 10 episodes and nearly half the season leaks, you can bet there will be consequences.

In an unprecedented move of security and secrecy, the press will not receive any advance screeners of Game of Thrones upcoming sixth season, keeping the media and the public in the dark on the season that pushes past the published books and of which there hasn’t been a lick of official footage.

HBO president of programming Michael Lombardo told Entertainment Weekly, “We’re not sending out press copies this year, anywhere in the world. There will be no copies for review.”

The move is a likely a response to last year’s fiasco wherein the first four episodes of Season 5 were leaked to BitTorrent prior to the premiere after they were sent out as press screeners. Even for a show that regularly counts among the most heavily pirated on the planet, it broke records, receiving 3.22 million downloads within 24 hours of release.

While there were discussions about the effect and implementation of radio silence, Entertainment Weekly reports showrunners David Benioff & D.B. Weiss were adamant about it and convinced Lombardo to allow neither physical nor digital copies for preview.

“It’s painful for Dan and David [when leaks happen],” he said. “When you have press copies, inevitably friends ask, ‘Can I see your copy?’ There are things that happen. We talked about the upsides and downsides. Some of the press are fans who might be disappointed, but they’ll understand.”

While most shows rely on press screeners to get the word out about a show, Game of Thrones is a show in its prime and at the top of the game, critically and commercially. It has no such vulnerability to advance buzz. Of course, it also has an issue very few adaptations face – the absence of source material.

Author George R.R. Martin announced in January that The Winds of Winter, the sixth book in his A Song of Ice and Fire series, would not be published prior to the new season, making it the first time the show would take the story beyond the books. As such, it is largely unknown waters for both readers and non-readers. Adding fuel to the fire in the lingering question of Jon Snow’s (Kit Harington) fate, last seen betrayed by his Night’s Watch brothers and laying motionless in a pool of his own blood. All this adds up to the most anticipated season of Thrones yet.