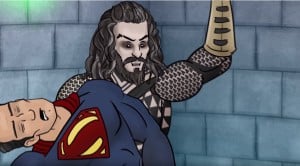 The YouTube team How It Should Have Ended (HISHE) have released a video attempting to fix the problems with Batman V Superman: Dawn of Justice.

The video primarily fixes the countless issues audiences and critics had with the portrayal of Superman, by having him utilize the full extent of his powers to save people and beat Batman in the fight. The video also saves Superman’s life and fixes the Auqaman cameo in the film by putting it in a more sensible place.

A variety of fan complaints have been solved with this video, from Superman saving the court from the bombing to two ideas of how to dispose of Doomsday instead of Superman’s self sacrifice.

Do you believe the upcoming Ultimate Edition of the film will fix audience complaints? Or if HISHE solved the film’s issues better than an extended cut possibly could? Let us know in the comments section!

You can watch the video below.