Hot Toys has just revealed its Death Trooper Specialist figure for the upcoming Rogue One in glorious detail. Somewhat surprising is that the Deathtroopers are the first to get a figure, yet they’ve also become a staple in marketing for the upcoming film.

Hot Toys is also known to do main characters last as with The Force Awakens we saw countless Stormtrooper figures before Finn and Rey. The troopers require less time as there are no face sculpts requiring actor approval.

To make up for the easier sculpt, Hot Toys is throwing in plenty of accessories for the figure. Extra hand grips, blasters, grenades, pistols, helmet lights, and shoulder straps all help to round out the figure. The Deathtrooper also stands just over 2cm taller than the Stormtrooper figures. 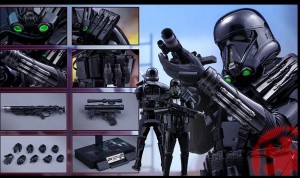 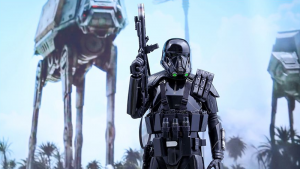 The figure will be available surprisingly quickly for Hot Toys figures as it releases on September 30th for $235.

From Lucasfilm comes the first of the Star Wars standalone films, “Rogue One: A Star Wars Story,” an all-new epic adventure. In a time of conflict, a group of unlikely heroes band together on a mission to steal the plans to the Death Star, theEmpire’s ultimate weapon of destruction. This key event in the Star Wars timelinebrings together ordinary people who choose to do extraordinary things, and in doing so, become part of something greater than themselves.