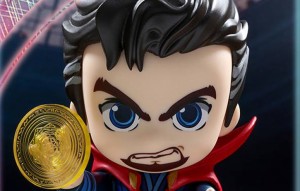 While fans eagerly await the first live-action adaptation of Doctor Strange to hit theaters, Hot Toys has revealed that The Sorcerer Supreme will be the latest addition to their line-up of Marvel Cosbaby figures. While a sixth scale figure of the character was recently revealed, this Cosbaby toy will likely appeal to fans who are interested in a less intimidating and more friendly depiction of the character to put on their shelf.

Hot Toys has released five images of the figure featuring the character in an action pose, complete with a spell effect in his right hand, and a detailed look at the characters costume design. A released date for the figure has yet to be announced.

You can view more images of the figure in the gallery below.