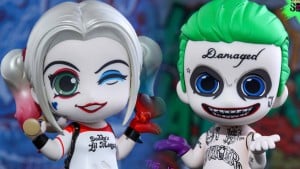 Hot Toys have announced and released a first look at their new line of Suicide Squad themed collectibles – the cosbabies. The line includes versions of Jared Leto’s Joker and Margot Robbie’s Harley Quinn.

Let’s take a look at the lineup.