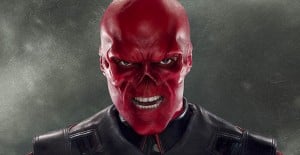 Despite what you may have heard about Hugo Weaving not enjoying his time as Captain America’s greatest enemy, in Captain America: The First Avenger. In a new interview, the actor revealed the “fun” time he had portraying the role. The last time we saw Weaving’s Red Skull, he was zapped inside the Tesseract, never to be seen again. While a lot of fans (myself included) would love to see Weaving return to the role, the actor has made it clear in the past that he has no idea if Marvel would like him to return.

In a new interview with Yahoo, while promoting his latest film, The Dressmaker, the actor stated:

“I thought it would be a lot of fun to play a classic über-Nazi, someone who thought Hitler was a pussy! [Laughs] It was fun to play; I enjoyed the outrageousness of the German accent that I employed and I enjoyed the extraordinary mask and costume, even though it was unbelievably hot inside it. I enjoy mask work; I enjoy trying to animate masks and reveal certain things that the mask itself might not reveal. V for Vendetta was another example of that, but there was less animation within that mask versus the Red Skull.”

While the actor does not reveal anything too enticing, it is nice that he enjoyed his time as Johann Shmidt. Hopefully, we will see the Australian actor return to the role shortly, but with contract expirations, it seems to become less likely. What do you guys think? Would you like to see Weaving return to the role in a possible Captain America 4? Or do you think it is time to move onto a younger version of the character, perhaps based on the Ultimate version?