Most of the tragic events that have occurred in the first six chapters of Star Wars saga were caused by the machinations of Ian McDiarmid’s Emperor Palpatine. However, after Ian McDiarmid’s Palpatine met his demise at the hands of a redeemed Darth Vader in 1983’s Star Wars: Return of the Jedi, most assumed the Sith Lord’s arc in the Star Wars franchise was complete.

So, it came as a surprise to many when the first trailer for Star Wars: The Rise of Skywalker revealed that Ian McDiarmid will reprise his role as Emperor Palpatine in the final chapter of the Skywalker saga. While previews for The Rise of Skywalker have kept Ian McDiarmid’s Palpatine hidden since the announcement, new pint glasses being sold by the Alamo Drafthouse show fans what could be the new look for the iconic villain. Based on the Star Wars glasses, Ian McDiarmid’s Palpatine looks just like he did when he was defeated by Darth Vader, but his eyes now have a hint of yellow in them with red bags underneath.

You can see the Star Wars: The Rise of Skywalker pint glasses with Ian McDiarmid’s Palpatine below. 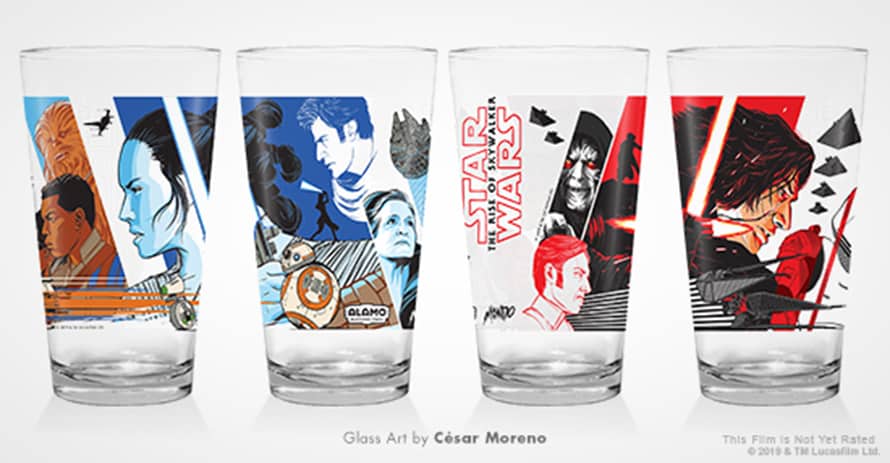 What do you think? Are you excited to see Ian McDiarmid’s Palpatine in Star Wars: The Rise of Skywalker? Let us know in the comments!

J.J. Abrams Reveals Why Palpatine Had To Return For ‘Star Wars: The Rise Of Skywalker’

Star Wars: The Rise of Skywalker hits theaters on December 19, 2019. Stay tuned for the latest news regarding Ian McDiarmid’s Palpatine and the future of the Star Wars franchise.