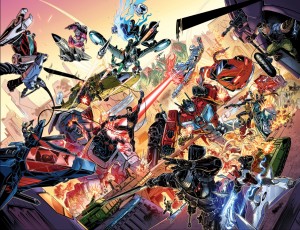 With the recently announced Hasbro Cinematic Universe at Paramount, IDW is launching their own Hasbro Shared Universe with the series Revolution, co-written by Cullen Bunn and John Barber, with art by Fico Ossio.

Transformers, G.I. Joe, and M.A.S.K. are all familiar to most Americans thanks to their popular eighties cartoon shows, but the other three properties are less widely known.  Rom and Micronauts were toys in the seventies that featured in licensed comics published by Marvel, back when Marvel did licenced material (like Larry Hama’s classic run on G.I. Joe). Action Man was the UK analog to the original 12-Inch G.I. Joe.

Rom the Spaceknight created and written by the legendary Bill Mantlo, creator of Rocket Raccoon among others, is one of the greatest  long form comic tales Marvel ever published (and one of the earliest examples of an ongoing stealth crossover event). But due to the licensing issues around the character, he has not been accessible to Marvel, and only a few elements of the comic’s mythos have been retained in the current Marvel cosmic continuity. There are no trades of Rom or reprints, but if you can hunt down a full run of it, it is well worth the purchase and the journey.

Rom is so great James Gunn has gone on record wishing he had access to the greatest of the Spaceknights for his second Guardians of The Galaxy film.

IDW will finally have a shared world to compete with the big two. I am very optimistic about this project given the quality of work that IDW generates and their proven ability to surprise and satisfy the very devout fandoms of their IP.

What do you think about IDW creating a shared Hasbro Comic Universe?