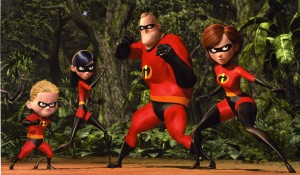 When Pixar was still somewhat in its infancy it released a “little” film called The Incredibles about a superhero family, and it was an instant smash. Like all of their earlier titles, this film was collectively adored.  Introducing us to this “first family,” fans loved the film and have been craving a sequel ever since. With Pixar going back to the well from their first smashes (like the sequel to Finding Nemo: Finding Dory), it’s about time for us to get a proper sequel to one of the modern superhero smashes.

12 years after introducing Mr. Incredible, Elastigirl, Violet, Dash, and Jack Jack came to us, director Brad Bird is bringing us The Incredibles 2. The film is due to hit theaters in 2019. While promoting the Blu-Ray release of The Iron Giant, he talked a little about the upcoming sequel. In typical Pixar non-speak, he didn’t reveal too much beyond that it’s happening.

“I don’t like unwrapping presents before Christmas. It’s very actively moving, and we’re excited about it. “[We’re] trying to take it in some new directions.”

The film was originally released in 2004 when there weren’t a plethora of superhero films. The only competition at the time was X-Men and the original Spider-Man film. However, in 2019, as we are in the “age of superheroes,” the competition will be stiff with films like Captain Marvel, Shazam, and the untitled Justice League and Avengers sequels. That doesn’t seem to worry Bird at all.

The first film was great because it concentrated more on the family dynamic versus the superhero aspect. If it continues to build upon that, the sequel will no doubt be great as well.