‘Iron Fist’ Review: A Hero And Show In An Identity Crisis

Into the burgeoning Netflix side of the Marvel Cinematic Universe enters Iron Fist, the fourth solo series after Daredevil, Jessica Jones, and Luke Cage leading up to this summer’s big The Defenders crossover event. Like all shows in this corner of the MCU, it’s already too long by at least three episodes and, like all the movies, grading each individual installment is more of an exercise in style than substance, as visual aesthetics and narrative structures are carried over between installments.

Where Iron Fist stumbles is in creating a space for itself. Daredevil impressed with its grit and realism, in contrast to the colorful, broader movies. Jessica Jones and Luke Cage are intensely-personal projects wrapped up in superheroics and earned praise for depicting the first female and black superheroes in the MCU, ahead of movies’ Captain Marvel and Black Panther. What makes Danny Rand aka Iron Fist different? By extension, what is his show about? After watching the first six episodes which were made available for critics, I still don’t know. And I’m not sure if the producers do either.

Ostensibly, the show is a crime drama, like the other Defenders shows, but with its disparate elements of fish-out-the-water storytelling, mysticism, and corporate malfeasance, it never comes together beyond its bare superheroic bones, remaining formulaic in structure and formless in tone. If Logan is an example of what happens when you blend together several genre flavors in a superhero pot to create something new and delicious, Iron Fist is an example of how to make a bland dish from ingredients that dampen each other. And, for the brief talk of trouble adapting the mysticism of Iron Fist for Netflix’s grounded dramas, the superpower itself is well-done, the special effect automatically making the show a better Dragon Ball Z adaptation than the terrible movie. 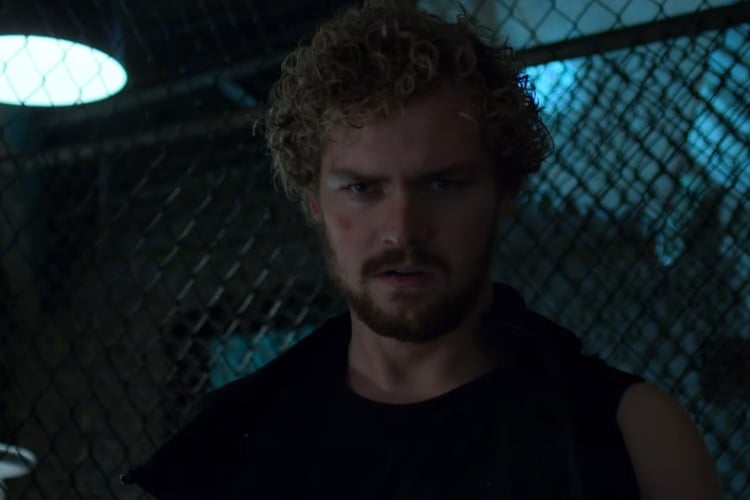 The show tells the story of Danny Rand, a billionaire orphaned at 11 in a plane crash in the Himalayas, where he stumbles into an extradimensional city named K’un L’un that only exists on Earth every 15 years. During his time in K’un L’un, he trains to become the Immortal Iron Fist, a prophesied warrior. When the 15 years are up, he returns to his hometown of New York City to reunite with his extended family the Meachums, assume control of his inheritance the Rand Corporation, and rid the city of the Hand, the undead ninja cult which the Iron Fist is destined to defeat. Naturally, all three of these threads are intertwined from the get go, which the six episodes take pains to establish.

It’s not apparent what showrunner Scott Buck, responsible for the later, lesser (waaay lesser) seasons of Dexter and completely ignorant of the character prior to getting the job, brings to the property, other than a company man who could bring this show across the finish line. Obviously, Marvel TV got what they wanted, because they were happy enough with the result that they carried him over to ABC’s The Inhumans miniseries, which just started filming this week. Notably, THR reported that it was right after Buck’s hiring that the company ultimately decided to keep Danny white, despite auditioning Asian actors including Lewis Tan (who instead got the villainous role of Zhou Cheng), and it’s a decision that creatively reverberates throughout the show.

The obvious answer to making Danny more relevant today was to make him Asian-American. Indeed #AAIronFist was a real campaign supported by Geeks of Color and several others last year, prior to the casting of Finn Jones. It would have fit nicely with the Marvel/Netflix strategy of diversifying its superheroes, giving the full array of the human experience representation in the Defenders. After all, there’s already a white martial artist in the group named Daredevil. After Buck’s hiring, the show took the traditional route and the show suffers for it, because now Danny is just a slightly-sunnier Bruce Wayne (or Oliver Queen) from Batman Begins (or Arrow). Producers claim keeping Danny “an outsider” was key in their decision, but anyone who knows a person of color or who has struggled with their identity knows this is a cop-out.

On the heels of similarly-magical themed characters like Doctor Strange and Ghost Rider popping up in the MCU, Iron Fist doesn’t feel like a breaking of reality or anything (this is a world where the Norse gods exist after all). The problem with Iron Fist isn’t with its outlandish elements, but its grounded elements. The street-eye view that dominated the three previous shows becomes an eagle-eye view from the top of a billion-dollar company, where the characters are much less likable, though the show demands we empathize with them. It’s like Billions meets The Wire with bland superheroics thrown in.

From episode 1, it dives headfirst into some of the most tired ideas in the genre. The first few episodes had me rolling my eyes quite a bit from numerous instances of poor communication (take a drink for every time “I just need to talk” is said, and you’ll be smashed by the end) or just plain plot-induced idiocy from the characters. This is not a show aware of its own medium or storytelling unlike, oh I don’t know, Logan (guys, Logan is awesome). It prevented me from investing in these characters’ journeys. Despite the poor writing, I was taken with the performers, who are quite a bit better than the material.

Jones, a Game of Thrones veteran, acquits himself well given the quandary of a modern-day Danny Rand. He reminded me of a cross between young Bruce Wayne returning to Gotham for the first time and Nightwing fresh on the job. He is more optimistic character than the typical billionaire orphan superhero but not without his breaking points. Much of his initial time in New York is taken up by arguing for his very existence, to the point you’re begging him to punch someone just so we can get over the whole rigmarole . It doesn’t help that Danny spends the first few episodes as hobo Bruce Lee. It’s only when he finally acclimates to running a company or simply living in normal society again that the plot starts moving forward in an unpredictable way and the series finally begins to pick up steam.

Fellow Thrones star Jessica Henwick’s Colleen Wing is a stand-out, a normal person who just so happens to be able to kick the ass of not one, but two men twice the size of her at the same time. Her human vulnerability inherently makes her more interesting than the supernaturally-imbued, nigh-unflappable Danny, who, as I said, is only really interesting when he is actually, you know, struggling. Colleen meanwhile is an innocent bystander drawn in Danny’s conflicts by virtue of his homelessness and their shared love of martial arts. She’s a much better window in the world of Danny than the show seems to credit her for and arguably, she’s the character who changes the most in the first six episodes. Henwick sells both her physicality and her reluctant heroism.

David Wenham plays Harold Meachum, the Rands’ business partner who took over the company after their deaths and gave it to his children, the never-good-enough son Ward (Tom Pelphrey) and the overachieving daughter Joy (Jessica Stroup). They jump from antagonist to ally at a moment’s notice. The show doesn’t seem interested in presenting them as likable, which makes it more interesting when they delve ever so slightly into their psychology. The difference between meeting these characters and getting to know them is the difference between the quality of the first few episodes versus the last few. Wenham for his part seems to be having fun hamming it up as another “man behind the man”-style villain in the vein of Kingpin, Kilgrave, and Diamondback.

Fans can expect to see Carrie-Anne Moss’ wily lawyer Jeri Hogarth pop up in her third Marvel/Netflix series following Jessica Jones and Daredevil, as well as Rosario Dawson’s perennial favorite Claire Temple, making good on her decision to ask Colleen for training at the end of Luke Cage season 1. Wai Ching Ho reprises her Daredevil role as the otherworldly crime boss Madame Gao, implied to be a former resident of K’un L’un. Danny’s fight scenes are, unfortunately, pretty boring. I never found myself as impressed as I was when I first watched the Daredevil hallway fight in season 1 or the staircase fight in season 2. I was most engrossed during Colleen’s cage fights, where the stakes seemed most real.

Iron Fist does the heavy-lifting putting tying together the threads for The Defenders, establishing the Hand – seen extensively in both Daredevil seasons with numerous plot threads left unresolved – as the sworn enemy of the Iron Fist. The Marvel TV bosses have been very careful at laying interconnected breadcrumbs, some of which haven’t even been apparent until now (we still don’t know what was up with that giant hole in Daredevil season 2, for example). But it’s comforting to see that all four shows have been building, rather than rambling, toward something i.e. The Defenders. I just wish they had gotten here faster.

Whereas Luke Cage lost steam as it transitioned for its first half to its second, Iron Fist struggles out of the gate to really grab the viewer. Fortunately for the show, binge-watching is the new model and the clunkiness of the first few episodes give way to more depth and action in the later few hours I watched. It’s certainly possible that the back half of Iron Fist season 1 addresses some or all of the problems I talked about it in this review, but I personally would be satisfied simply if more propulsive, competent storytelling continued. The ship to make Iron Fist relevant sailed at the series conception. Instead, it exists as a milder, more fantastical Daredevil. Under that limited scope, it works; nonetheless I can’t help but watch and think it could have been so much more.

All 13 episodes of Iron Fist season 1 debut Friday, March 17 at 12:01 a.m. PST. The titular hero returns in this summer’s eight-episode team-up The Defenders. The Marvel/Netflix crossver is followed by The Punisher spin-off this fall, with a third season of Daredevil and second seasons of Jessica Jones and Luke Cage in development for 2018.