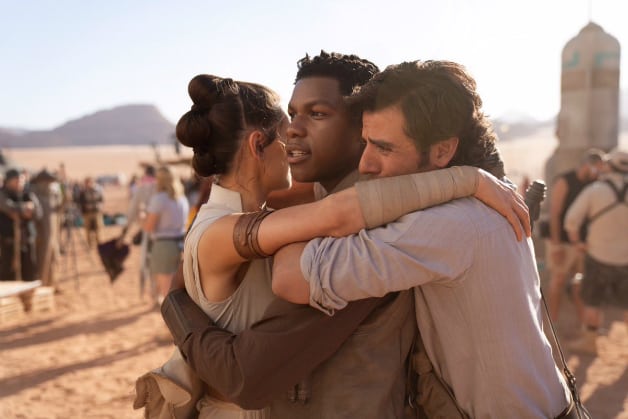 “Without getting in the weeds on episode eight, that was a story that Rian wrote and was telling based on VII before we met. So he was taking the thing in another direction. So we also had to respond to Episode VIII. So our movie was not just following what we had started, it was following what we had started and then had been advanced by someone else. So there was that, and, finally, it was resolving nine movies.”

J.J. Abrams also talked about the huge challenge of not having a overall plan for the sequel trilogy as he concludes it:

“While there are some threads of larger ideas and some big picture things that had been conceived decades ago and a lot of ideas that Lawrence Kasdan and I had when we were doing Episode VII, the lack of absolute inevitability, the lack of a complete structure for this thing, given the way it was being run was an enormous challenge.”

J.J. Abrams is the only director next to George Lucas to direct multiple Star Wars films. However, Rian Johnson will join that company after he finishes Knives Out and begins work on a new trilogy of films.

Do you think J.J. Abrams will retcon what Rian Johnson did in The Last Jedi? Comment below!

The title and teaser for Star Wars: Episode IX is expected to be revealed later this week. Stay tuned to Heroic Hollywood for all the news from Star Wars Celebration this weekend!

The first official photos from Terminator: Dark Fate are here and they feature Arnold Schwarzenegger and Linda Hamilton.

You can check out the first Dark Fate photo below and click "next" to view the rest of the gallery!

Deadpool helmer Tim Miller is directing the film from a script written by Billy Ray, David S. Goyer, Justin Rhodes, Josh Friedman, and Charles H. Eglee. The script was developed in a writers room to stand on its own while simultaneously forming an overarching storyline for what is planned to be a new trilogy of movies.

Dark Fate will introduce newcomers Mackenzie Davis and Natalie Reyes, as well as Gabriel Luna (Marvel's Agents of S.H.I.E.L.D.) who plays a brand new Terminator in the film. Plot details remain under wraps, but Miller's project is a direct sequel to Judgment Day, ignoring all the other films in the franchise.

Terminator: Dark Fate opens in theaters on November 1, 2019. Stay tuned to Heroic Hollywood for the latest news on the series.