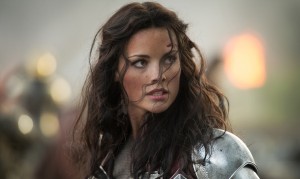 Thor’s Jaimie Alexander has crossed over to DC – at least to pay a set visit to Gotham. The Blindspot beauty took some time out of her schedule to act like a boss at Wayne Manor. She is currently preparing for the show’s second season which returns this fall to NBC. 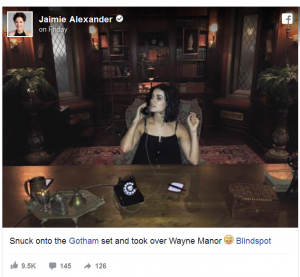 She also took a selfie with some of the members on the dark side of the Gotham cast: Drew Powell (Butch Gilzean), Cory Michael Smith (Riddler) and Robin Taylor (Penguin).  Sure looks good to be bad! 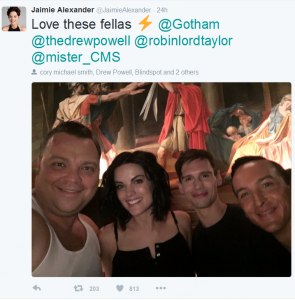 Is a crossover in the making? The busy actress is still very much committed to Marvel; she previously played Lady Sif in Thor (2011) and Thor: The Dark World (2013). She is rumored to reprise her role as Lady Sif in Thor: Ragnarok, expected in theaters November 2017.  Earlier this year, the cast list came out with out her name on it and Alexander quickly tweeted out “Don’t worry…” to concerned fans, signaling that there must be something in the works.

Once thought to be in contention for Wonder Woman, which eventually went to Gal Gadot, Alexander, in an interview with Variety, likened her character Lady Sif to the Wonder Woman of the Marvel Universe.

“Sif, in her way, is Marvel’s Wonder Woman. They’re both ethereal and have armor and a sword, and have special abilities; the physicality of the role is very similar. The thing I really enjoy about Marvel is that they start with a character first and all the explosions and costumes, the glitz and glam, are secondary to who the actual character is deep down. That’s something I haven’t really been able to find with DC Comics. I know that’s a bold statement, but it’s been my experience.”

Blindspot returns to NBC this fall; the second season premieres on September 14th at 10/9C.