James Gunn confirmed that Guardians of the Galaxy Vol.3 won’t include a dance off between Star-Lord and Thor.

One of the funniest scenes from Avengers: Endgame saw Star-Lord and Thor politely argue over who was the captain of the ship, and it left fans wanting to see a dance off between the two in James Gunn’s Guardians of the Galaxy Vol.3. Since Thor followed the team into space at the end of the most recent Avengers film, many fans are hoping that the God of Thunder makes an appearance in the James Gunn sequel.

One fan in particular had sent numerous messages to the director on Instagram begging for a dance off between Star-Lord and Thor in Guardians of the Galaxy Vol.3. James Gunn quickly shot the idea down by captioning the series of messages with “not gonna happen.” While Star-Lord and Thor’s dance off would be a funny scene, the director obviously has a plan for his third film in the series. Take a look at the photo from his Instagram story below. 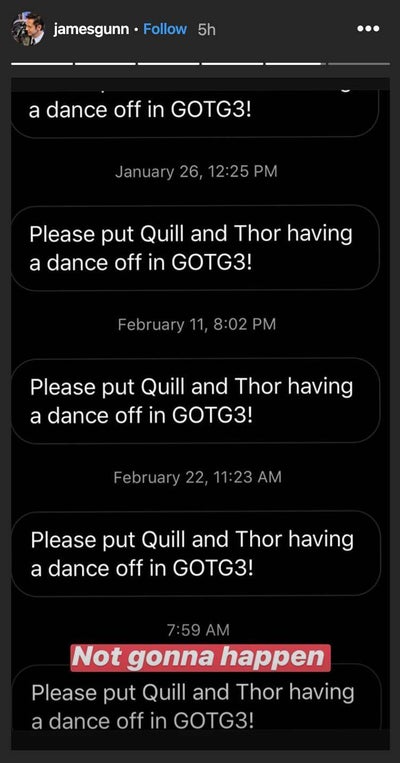 What do you want to see from the James Gunn film? Do you think Thor should make an appearance? Sound off in the comments below!

Stay tuned to Heroic Hollywood for the latest news regarding James Gunn and the next Guardians of the Galaxy movie.