James Gunn revealed that writing the script for The Suicide Squad was a faster process than what he’s accustomed to.

On his official Instagram profile, James Gunn replied to a fan’s comment asking him how long it takes to write a script for any of his films, whether it is for The Suicide Squad, his Guardians of the Galaxy movies or his indie releases like Slither and Super. James Gunn responded with the following: 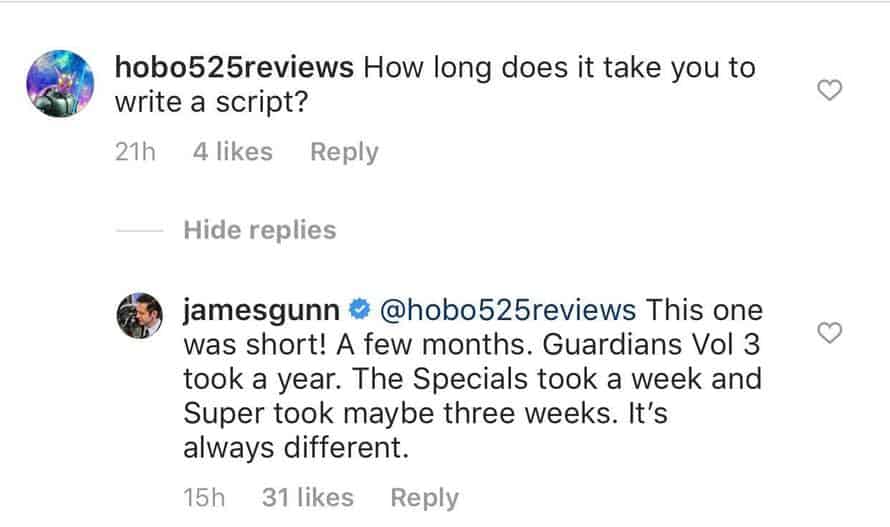 Before he signed on to write and direct The Suicide Squad for Warner Bros. Pictures and DC Films, James Gunn was getting ready to direct Guardians of the Galaxy Vol. 3, which already had a script written. However, after controversial tweets from his Twitter profile resurfaced, James Gunn was fired from Disney and eventually signed on with Warner Bros. for The Suicide Squad. Disney has since reinstated James Gunn to his directing duties for Guardians of the Galaxy Vol. 3.

Given the scale of certain films as well as the unique circumstances regarding James Gunn’s involvement with The Suicide Squad, it’s interesting to see how he was able to get a script ready in months time compared to spending a whole year writing the script for Guardians of the Galaxy Vol. 3. It is also worth noting that because he’s spent significantly more time with the Guardians franchise, it makes sense as to why he spent a longer amount of time writing what is set to be the conclusion of a trilogy compared to what looks to be a standalone sequel/soft reboot of the Suicide Squad series.

What do you make of James Gunn’s timeliness in his writing process? Are you eager to see how he puts in his unique sensibilities in the DC Extended Universe compared to his work with the Marvel Cinematic Universe? Sound off in the comments below.