Jason David Frank Could Be Playing Bloodshot In ‘Ninjak’

Jason David Frank is best known for playing the role of Tommy the green/white ranger during the Mighty Morphin’ Power Rangers original run, and is now rumored to be playing a role alongside Arrow‘s Michael Rowe in the upcoming Valiant Entertainment and Bat in the Sun webseries Ninjak.

Although it is currently unknown what role Frank may be playing in the webseries, there are some potential hints posted on social media that he may be playing the character Bloodshot. Bloodshot first appeared in Eternal Warrior #4 in November of 1992 and is a hero and a former soldier with regeneration and meta-morphing abilities made possible through nanites that were injected into his bloodstream.

A cosplayer named Jesse Fresco posted to social media that Frank had begun following him on Instagram. Franco is best known in the cosplay world for having a top of the line Bloodshot costume that he brings with him every year to a large number of comic book events and conventions. This was roughly 14 hours after Frank confirmed that he would be appearing in a Valiant Entertainment project by sharing, “Booked a new show by Valiant Entertainment directed by Bat in the Sun. Big announcement at New York Comic Con.” This correlates well with the original Ninjak rumors, which said that information on the project would be released at this year’s New York Comic-Con.

Frank has already confirmed he will be signing autographs at the Valiant booth. Check out his announcement: 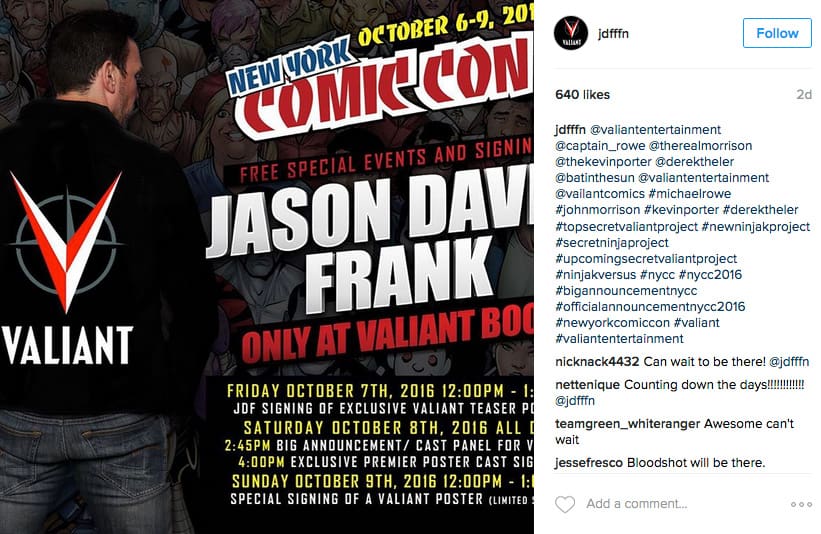 Frank has other cryptic photos on his Instagram that all hint at his connection to Valiant Entertainment. It’s only a matter of time before we know for sure if Frank will in fact be playing Bloodshot.

Do you want to see Jason David Frank as Bloodshot in Valiant Entertainment’s Ninjak? Let us know down in the comments.