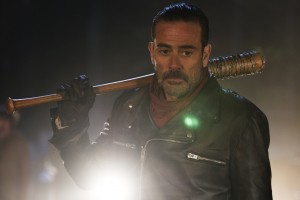 In a little more than a month, The Walking Dead returns to the small screen. With the anticipated premiere, we get to see who Negan’s victim will finally be after the season finale cliffhanger. After the rush of finally seeing the unlucky guy (or girl) get their brains bashed in, we will get to see a whole new world, one that Negan rules. As a result, we will get to see and learn more about Negan as his much-layered character show Rick and company how things will be going forward. Actor Jeffrey Dean Morgan couldn’t be better suited and is having a great deal of fun as the character playing Negan, the wielder of “Lucille.”

Lucille almost has a life of its own. The barbed wired baseball bat that Negan uses to punish his victims with even has its own backstory recently revealed in the comics. The Bat is named after his dead wife. The character even talks about it and refers to it as the “love of his life.” Morgan had the chance to talk about the role and using Lucile. He recounts on the first time being able to hold her.

“It was awesome. It really kind of, for me, informed my character and who I was — just kind of the heft of her and the love that he has for her. It makes him hard, for God’s sake, just holding her. But it was great care taken with Lucille from the guys that built her.”

Morgan in a similar colorful manner to Negan went at lengths to describe how Negan views Lucille in practical terms.

“There’s something about her, especially when there’s blood dripping off her. There’s a certain beauty that she has. And for me it’s an extension of Negan. They become one in these scenes together. It’s his d**k. I mean, for lack of a better thing, it really is.

It’s how he walks differently with her, he holds her, and it’s a part of him. He uses her to emphasize certain points, not just ‘I’m going to kill you.’ There’s a thing that he has with Lucille, and it’s as close to love as maybe Negan will ever have. He loves Lucille. She’s a character of her own. I mean, she really is, and I love the way he talks about her and he feels about her and how he treats her. But yeah, the first time I held her I knew — this is it.”

In addition to the signature weapon, Negan is known for his leather jacket. Morgan also commented on the downside to looking like a badass in 97-degree heat in Atlanta.

“It’s very hot. I mean, it’s very hot. When we shot the [season finale] in November, I was like, ‘This is great!’ I was so happy, not thinking oh, July in Atlanta. Now I’m just f***ing sweating. I can’t keep in enough fluids.”

To combat the heat, Morgan is an avid Gatorade drinker and relaxes in his trailer

“I’m pounding Gatorade, but I’ve still been fighting cramps. I get horrible cramps midway through a scene, my ribs will cramp up or my legs or something. So it’s about trying to get that under control. You don’t go back to your trailer on this show. It’s not like other shows where you do a scene, you go back to your trailer, and you sit in the air conditioning. We all stay on set all day. We don’t leave. Once you get to work in the morning, you go to set and you’re there for 14 or 16 hours in that heat with the crew.”

The Walking Dead returns to AMC October 23rd on AMC.