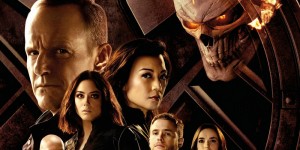 Since returning to Marvel Studios in 2013, fans have been wondering when and where the spirit of vengeance will appear next. Many, including myself, firmly believed the character would appear on one of Marvel’s gritty and ‘R-rated’ Netflix shoes like Daredevil or Jessica Jones. However, now that the character has made his official return to live action thanks to Agents Of S.H.I.E.L.D, the Ghost Rider has returned. In an interview with Jeph Loeb, Comic Book Resources asked what made Robbie Reyes’ version of the Rider the perfect character for season 4.

Loeb also revealed that despite the character featuring on all the marketing and such for the show’s latest season, fans should not be worried as the character does not “overshadow” the returning cast. Loeb responded to fans who were disappointed that Ghost Rider would appear on the ABC program instead of his own show on Netflix, saying, “there is nothing weirder, stranger, more unreal or dangerous than Ghost Rider. In many ways, it lends itself right to what’s going on [on Agents Of S.H.I.E.L.D].”

So what do you guys think? Are you all keen to see the spirit of vengeance back in live action, or would you have rather had a third film starring Nicolas Cage himself?