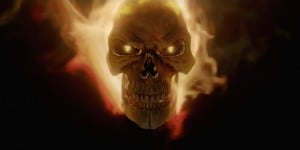 Ever since Agents of S.H.I.E.L.D. began teasing season four with a flaming chain, many fans speculated if we were possibly going to get Ghost Rider on the small screen, or if they were going to develop Inhuman James AKA “Hellfire.” After all, on the show, he already had a chain that he would touch and basically set aflame. Many thought that it being Ghost Rider was too good to be true and a possible fake out. However, our prayers were answered and we were going to get Ghost Rider on Agents of S.H.I.E.L.D. But which one would we get? Depending on how old you are, your Ghost Rider is Johnny Blaze, Daniel Ketch, Alejandra, or Robbie Reyes. With the announcement that Ghost Rider would be in season four, it was also announced that this iteration of the Spirit of Vengeance would be Robbie Reyes complete with his muscle car.

“It’s incredibly exciting, and I know a lot of people were speculating on it. Not only is it exciting to be able to tell people that it’s Robbie Reyes, but that we have this unbelievably cool car, that 1969 black Charger that’s still on the floor of the convention, and then on top of that that we’ve just announced that Gabriel Luna, who is an extremely talented young actor who people may know from Matador on El Rey. It’s going to be a hell of a season.”

When discussing the decision to pick Robbie Reyes instead of Johnny Blaze Loeb also said:

“We picked Robbie, actually, because our show, at the end of the day, is always about family. The fact that Robbie’s relationship with Gabe [Robbie’s developmentally disabled brother] is so much a part of his character, and the world of east LA, which is not a place that we’ve ever gone to in the Marvel universe, was just a really exciting way.”

Take a look at the video below courtesy of ComicBook.com