John Barrowman is officially joining the Arrowverse Elseworlds event, though it hasn’t been revealed specifically who he’ll be playing just yet.

Beginning next Sunday, December 9th, The CW’s Arrowverse is getting turned on its head. The Elseworlds crossover event will span across the series The Flash, Arrow and Supergirl and features some very interesting shake-ups such as Barry Allen (Grant Gustin) and Oliver Queen (Stephen Amell) switching superhero alter-egos. Some other Elseworlds updates include Kara Zor-El (Melissa Benoist) donning the iconic blonde Supergirl look and her cousin Superman (Tyler Hoechlin) donning the iconic grey and black super suit.

Elseworlds Photo Has Flash, Supergirl & Arrow Pose Next To Bat-Signal

The latest image released from the Arrowverse event teases the return of John Barrowman. The actor played Malcolm Merlyn in the series Arrow, but it isn’t yet specified whether or not he’ll be playing that same role, just with a personality twist, when he appears in the Elseworlds event. Take a look at the image below to get hyped for the actor’s return to the Arrowverse. 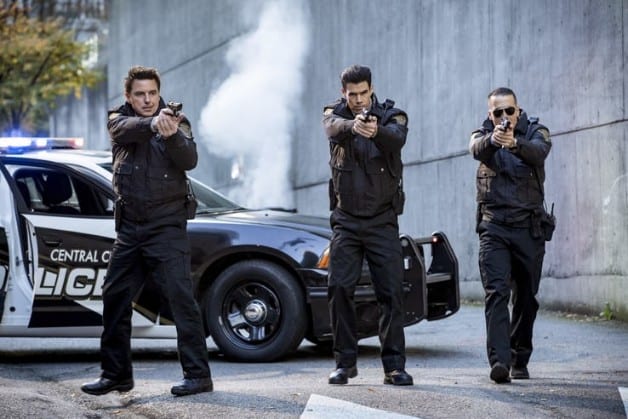 The CW’s Arrowverse has been around since 2012 when Arrow debuted and eventually led to the spin-off The Flash premiering in 2014. Since then, more shows have joined the line-up and each season the creative teams figure out new and creative things to pull from the comics to please die-hard fans of those comics and new fans who have discovered the characters through the series.

We’ll be sure to keep you updated on all news regarding the Arrowverse Elseworlds event as soon as more information becomes available. Will you be tuning into the event when it begins next week? Which character change are you most excited to see play out? Let us know your thoughts in the comments below!