John Boyega, one of the stars of Star Wars: The Rise of Skywalker has thrown fuel to the fire of speculation regarding a certain story element on Finn.

SPOILER WARNING: The article below explores plot details for Star Wars: The Rise of Skywalker. Read at your own risk.

In Star Wars: The Rise of Skywalker, Finn (John Boyega) goes on an adventure with Rey (Daisy Ridley) and Poe Dameron (Oscar Isaac). Throughout this adventure, Finn often teases to Rey that he’s meaning to tell her something important. Unfortunately, the film never explicitly answers what Finn wanted to tell Rey, and some fans are speculating what it is that he wanted to tell his friend.

Some have interpreted this as Finn wanting to confess his romantic feelings for Rey, based on the duo’s interactions in Star Wars: The Force Awakens as well as what seems to be a platonic relationship Finn shares with both Poe and Rose Tico (Kelly Marie Tran). But another interpretation has grown popular amongst some fans who have seen the film: Finn is Force Sensitive.

John Boyega has since posted a video on his official Instagram, where he reflects on ending his journey on the Sequel Trilogy with the cast and crew after spending at least half a decade on the franchise. In this post, a fan asked him specifically about what Finn wanted to tell Rey. John Boyega replied to the comment with the following: 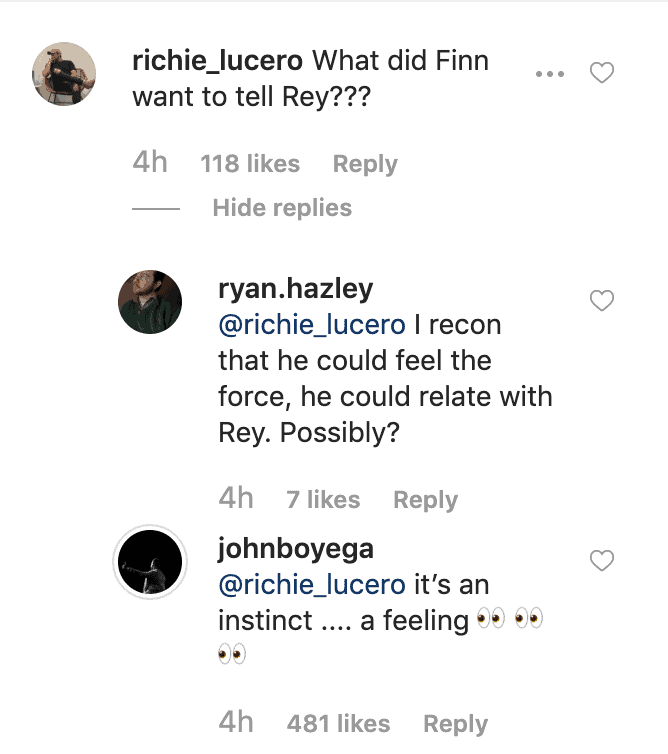 There are several moments in Star Wars: The Rise of Skywalker that hint that Finn is sensitive to the Force. When he meets warrior and fellow ex-Stormtrooper Jannah (Naomi Ackie), they share a touching conversation inside the Millennium Falcon in which he brings up how he had an “instinct” and a “feeling” when he made the decision to defect from the First Order in Star Wars: The Force Awakens.

Other examples throughout the new film involve Finn sensing the presence of Kylo Ren (Adam Driver) as he flies toward Rey in the desert planet Pasaana. He is also able to sense which Star Destroyer out of so many in the skyline that is the one needed to navigate the First Order’s fleet. Jannah asks him how he knows, to which he replies that he feels it.

And in perhaps the most apparent tease at Force Sensitivity, Finn senses Rey’s death after she defeats her grandfather Emperor Palpatine. This is similar to how Kylo Ren was able to sense his mother General Leia Organa (Carrie Fisher) dying during one of his Lightsaber duels with Rey.

‘Star Wars: The Rise of Skywalker’ On Track To Flop At The Box Office In China

John Boyega has previously expressed no interest in reprising his role as Finn in a Disney+ series, sharing that he would rather remain in the franchise’s big screen outings. So given that Finn survives the events of Star Wars: The Rise of Skywalker, if he is in fact Force Sensitive based on how he’s portrayed in the film, if Lucasfilm had plans to continue using the new characters in future projects, perhaps Finn can further explore the Force and may even become Rey’s first Jedi pupil. It’s only a matter of time before we hear more about Lucasfilm’s plans for John Boyega and Daisy Ridley among other surviving characters.

Have you seen the film? Do you believe that John Boyega’s Finn is Force Sensitive? Sound off in the comments below, and be sure to continue following Heroic Hollywood for all the latest news on John Boyega and the future of the Star Wars franchise.

Star Wars: The Rise of Skywalker is now playing in theaters.