On Friday September 21, filmmaker Todd Phillips (The Hangover Trilogy; War Dogs) released an incredible screen test for his upcoming film, Joker. The screen test involved Academy Award-nominee Joaquin Phoenix as Arthur Fleck staring at the camera as projections of the Joker in action are overlaying his face as a sinister smile slowly grows as the camera zooms in closer. We then see our first official look at Phoenix in Joker makeup.

The day after that screen test was released, more set photos taken by numerous paparazzi have leaked online. While previous photo leaks have shown Phoenix in character as Arthur before he becomes the Joker, these new leaks have shown Phoenix in his full Joker outfit including the makeup and clown attire. This was certainly not Phillips and Warner Bros. Pictures’ intended first reveal of the Joker in action.

Following the release of more paparazzi photos, Phillips shared an official snapshot of Zazie Beetz (Atlanta; Deadpool 2) as her character Sophie Dumond – a single mother. After posting this photo to Instagram, a fan asked Phillips why he is posting quite a bit of material about the film well over a year before it hits theaters. You can read Phillips response down below: 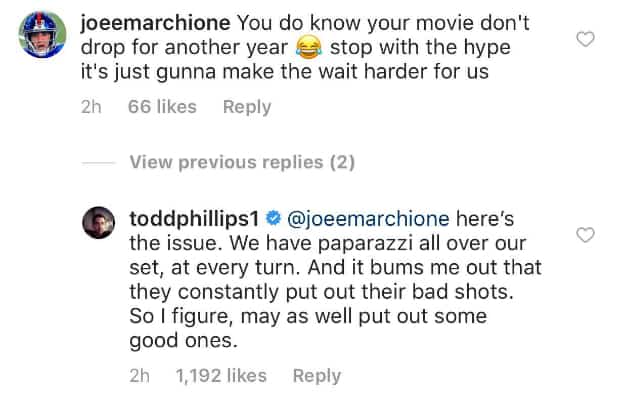 Phillips is frustrated that the moviegoing public is already getting glimpses at Phoenix in his full makeup and outfit before any officially licensed material is released. Regardless of that, Phillips is more than happy to use his social media skills to give some of his own teases to help mitigate such leaks.

Here is the synopsis:

Joker centers around the iconic arch nemesis and is an original, standalone story not seen before on the big screen. Phillips’ exploration of Arthur Fleck (Phoenix), a man disregarded by society, is not only a gritty character study, but also a broader cautionary tale.