Jurassic World: Fallen Kingdom, the latest installment in the dino-rampaging blockbuster film franchise originally launched by Steven Spielberg is finally available on Digital HD, 4K UHD, and Blu-ray formats and the TCL 6 Series Roku TV is the best Smart TV platform to enjoy the film on from the comfort of your own home.

The TCL 6 Series Roku TV, available in both 55″ and 65″ sizes, is the successor to last year’s P-Series and a fantastic 4K solution, boasting outstanding picture quality along with Roku TV OS which features a wide array of streaming apps and services for your home entertainment needs. It features 2160p resolution with Dolby Vision + HDR 10 and a wide color gamut that’s accurate right out of the box, allowing you to enjoy the rich color of Jurassic World: Fallen Kingdom‘s lush environments and dino-damage straight from the getgo.

The 55R617 offers fantastic black levels, along with high brightness, and superb contrast and color, allowing it to perform well in both bright and dark rooms, showing off Jurassic World: Fallen Kingdom‘s state of the art visual and practical effects which will allow viewers to fully engage with the wonderment and magic of seeing dinosaurs brought to life on-screen. 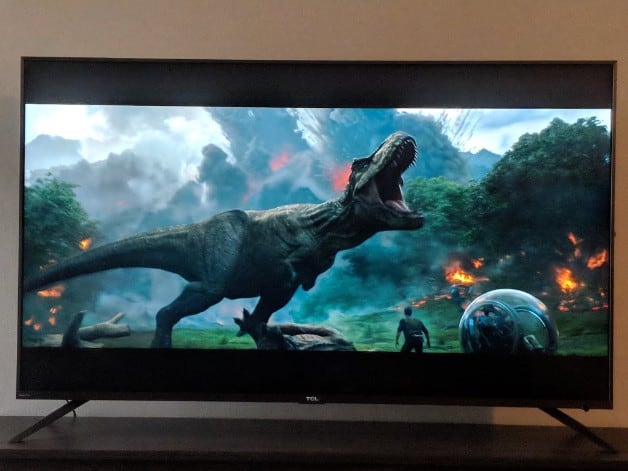 The 55R617 also features 3 HDMI ports, 1 USB port, 1 Digital Optical Audio Out, and 1 Analog Audio Out 3.5mm so you can connect all your favorite 4K UHD devices including PlayStation 4 Pro and Xbox One X, as well as your home theater system for the optimal experience of Jurassic World: Fallen Kingdom‘s DTS:X soundtrack.